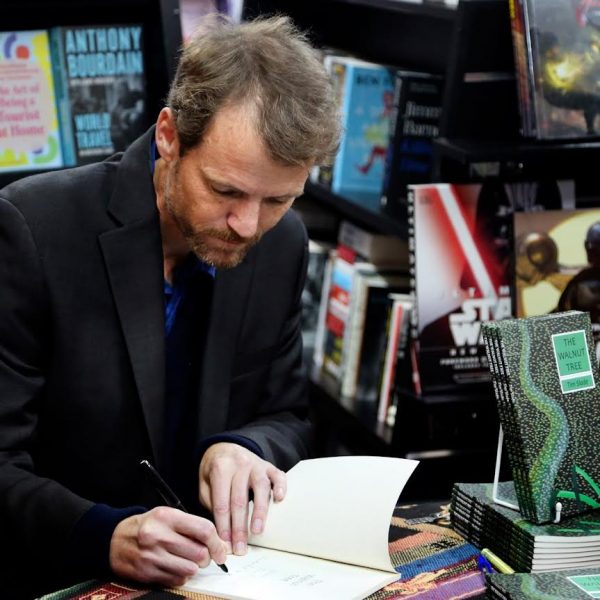 Tim Slade’s debut collection of poems is The Walnut Tree (2021, Bright South), which was launched by Pete Hay on May 27, at Petrarch’s Bookshop, Launceston, Tasmania.

“Real poetry involves not only a love of words, but also a vulnerability to life, an ability to feel its power. Tim Slade is a real poet who honours his island home with the sensitivity and sense of his attention. And he honours poetry by the acuteness of his reading, the depth of his vocation. The Walnut Tree is a fine debut, appealing to lovers of Tasmania, and to anyone interested in Australian poetry.”

Tim’s poems have been published widely, including in The Weekend Australian, The Koori Mail, Australian Poetry Anthology, Growing Up Disabled In Australia and Cordite Poetry Review.

In the years 2013 – 2021, Tim has contributed twenty-five articles for Tasmanian Times (online), investigating the recurring health risk from heavy metals in the drinking water at Pioneer. Tim has volunteered as an advocate for the community, and he has worked to reform the policies and practices affecting drinking water in Tasmania.

Born in 1976, Tim was raised in Hobart’s Risdon Cove, in the industrial suburb of Lutana. He graduated from the University of Tasmania as a school teacher, but his career was curtailed early by chronic auto-immune illnesses.

In 2009 Tim moved to the tiny town of Pioneer, near the Blue Tier, in Tasmania’s north-east. Over the span of a decade, from his tin-miner’s cottage, Tim wrote the poems for The Walnut Tree.

Articles about Tim Slade and The Walnut Tree: