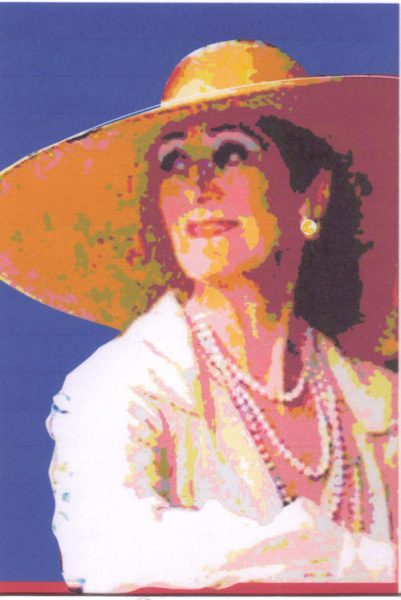 Louise Dando-Collins is a Logie-winning television personality, who has worked with famous artists, authors and film stars. She is married to internationally renowned author Stephen Dando-Collins. They travel extensively for research and live in Tasmania’s Tamar Valley wine region. Louise is currently at work on various other major projects based on her colourful life.

Louise has three books presently on AMAZON with a fourth – a memoir-based fiction soon to be published:

KATO is a chimpanzee raised in captivity and the star of the Darwin Research Institute’s sign language program in Santa Barbara, California. He is returned to the African jungle where he was born, following a “FREE KATO” campaign in the media. Introduced to a colony of wild chimpanzees in Tanzania, Kato uses skills learned from his human handlers to overthrow the alpha male, before leading his new ‘family’ on a quest which becomes a rampage. Will Kato survive the Tanzanian army’s bid to capture him?

“A CASTLE FOR SALE” – Duncan Campbell leaves Australia with his young family to buy the ancient Castle Airde in the Scottish Highlands, which at one time protected the legendary William Wallace. A mysterious collie dog appears that leaves no footprints in the snow. Youngest child Dottie says she sees a “Big Man” in the chapel. Lachlan MacGregor, a local carpenter helps the children with money-making schemes, and they befriend Mary Sinclair the local ‘stringer’ – a writer for The Edinburgh Flyer newspaper. They meet the quirky locals – the quaint Ghillie, and the hiccupping Mrs MacGivacuddle, along with the nasty Mrs Marjory Meddle and their wicked accomplices, Boris, Thumper, and Dingbat. There could be a ghost! There could be a monster! There certainly is a kidnapping – with the hostages thrown into a cold, dark dungeon on Christmas Eve! Will the very nasty Major Fordyce win the day? Or will Scottie the wonder dog help the Campbells’ live happily ever after?

FOTHERMUCKER – A famous but jaded female novelist seeking inspiration for a new novel that will reclaim her reputation, invites an attractive young female first-time novelist to stay at her home – “Huffam Mill” in Hartford Connecticut. The result is a death, a hit novel, and an unexpected twist.

THE OTHER SIDE OF LILLY – (a memoir-based fiction in the process of publication) Lillian Lightwood has been a victim all her life. She has survived a Dickensian childhood in Scotland where she was treated as a slave by her grandmother, an abusive marriage in Australia, the loss of her children in a bitter divorce, and a disfiguring car accident. She fights back with the help of one of Sydney’s leading psychiatrists, and a skilled plastic surgeon. Now Lilly seems to have it all – an exciting relationship with the plastic surgeon, a fabulous job with one of Sydney’s top art galleries. But manic gallery owner Eva Gold berg, an accusation of art theft, an ultimatum from the surgeon, and Lilly’s determination to win back her children will show a side few have ever seen – the steely, assertive, successful woman.