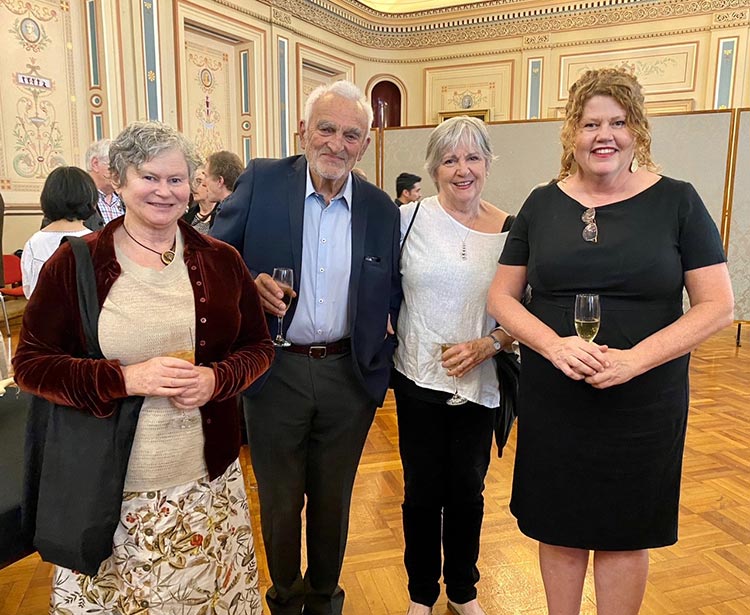 Writers Honoured by City of Hobart

TasWriters was delighted to have been able to support and participate in a recent reception at the Hobart Town Hall, hosted by the City of Hobart Council and Lord Mayor Anna Reynolds. Held on the 2nd of December, the event honoured the achievements of Tasmanian writers over the previous 12 months – they form an amazingly long and diverse list of people. You can see the full list (and read the Council’s report on the event) here, and we add an addendum: Amanda Lohrey is included for winning the Miles Franklin, however, as many of you will surely know, she was not only shortlisted for, but won the Prime Minister’s Literary Award for fiction, for her novel The Labyrinth – what a fantastic cap for the year’s achievements! We heartily congratulate Amanda and all of the writers who were part of the event.

We also extend our thanks to the City of Hobart and Lord Mayor Anna Reynolds for instigating the event. It was really wonderful to see writers being publicly celebrated in this way. Writers can often feel like the underdogs of the arts, alongside such showy and public media as music, screen and the performing and visual arts. We write quietly and privately, often in the dark hours when few others are moving, and our works are usually consumed in the same way – in quiet and private moments, rarely celebrated, or even shared, except in structured events such as book discussion circles or readings. Even in the latter, what has been heard communally is often not actually discussed afterwards, perhaps because it needs to be taken away and mulled over quietly, on one’s own. However it seems as though the tides might be turning. People are reading together and maybe COVID-19 has contributed to that. At the event Majda Flanagan mentioned a ‘Flanagan family book club’ – a great way of spending meaningful time together despite continental-scale separations between them. Another memorable ‘conversation’ recently was Frances Prince, a Melbourne writer, talking about reading with her elderly father during lockdowns. What she told was an amazing story that you can hear on Radio National, here.

As the Hobart City Council (and Anna Reynolds) suggested, there surely is truth in the saying that “creativity flourishes in beautiful environments”. Perhaps it also flourishes in troubled places and times too, and Tasmania and Tasmania’s writers have not been without troubles; so perhaps it’s also fair to say that the great writing that has come from our island is also testament to the perspicacity, resilience and wisdom our of our writers. Writer’s capacity to turn experiences into words and, in so doing, help us make sense of them is so valuable; it deserves to be celebrated more often and more fulsomely. We hope that the recent event was a sign that the important social and personal or individual contributions writers make will continue be better recognised and rewarded in the months and years to come.

In the image: Anne Morgan (left) and Lois Bury (second from right) – author and illustrator (respectively) of The Way of the Weedy Seadragon, recipient of the 2021 Whitley Award for the best Children’s Natural History Book. With Graham Bury and Lord Mayor Anna Reynolds (right).

More photos and details about the City of Hobart’s celebration and award recipients are available here.