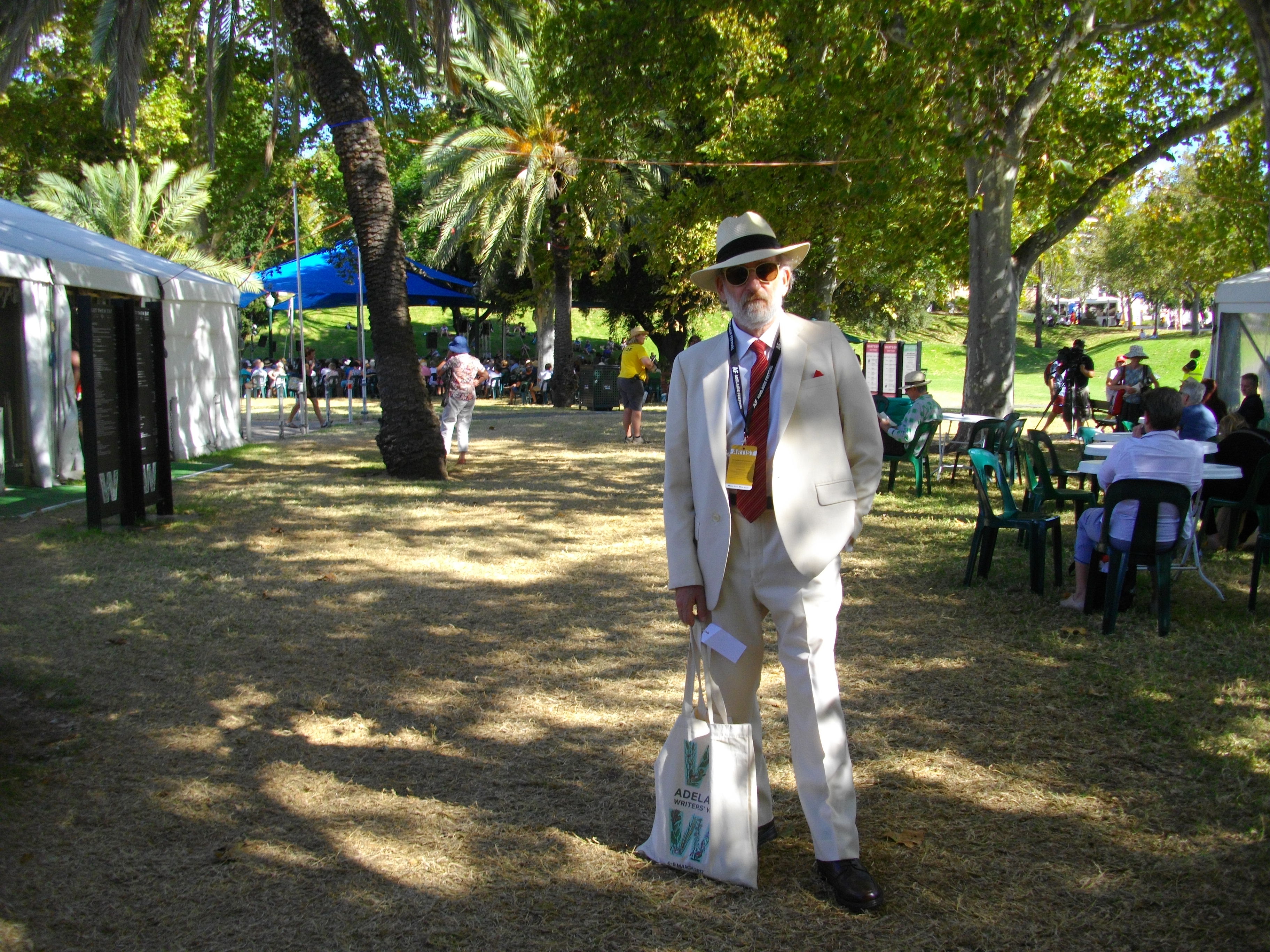 Tasmanian writer Louise Dando-Collins recently attended Adelaide Writers Week, along with her husband and fellow writer Stephen Dando-Collins. Louise has been kind enough to write a reflection on the event for the TWC blog. 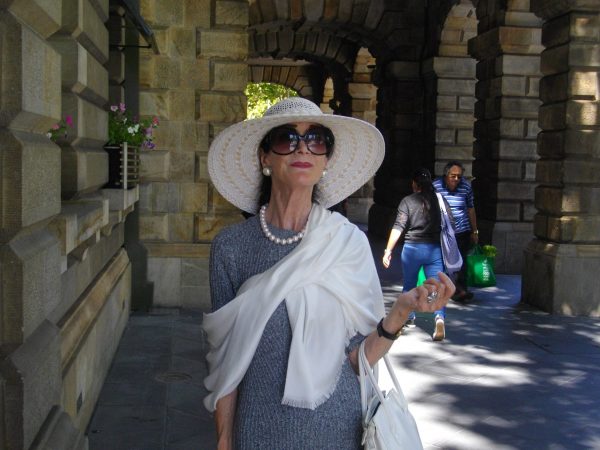 Attending Adelaide Writers Week, Australia’s largest writers festival, has long been an ambition, but attending the 2017 festival with my husband Stephen Dando-Collins, who featured on the program, was an especial joy.

Not only was the festival held in the most beautiful gardens bang slap in the middle of a grand city offering culture, history, and really nice folks, we also got to sample the behind-the-scenes action, socialising with fabulous authors from the US, UK, Spain, Germany, Iceland, and even from Australia!

AWW uses two main stages, each facing 1,500 people, under the dappled light of spreading trees and giant tarpaulins, in 35 degree heat – they say it never rains in Adelaide during Writers Week.

The thing I remember most is catching up with our dear friend Richard Fidler, fresh from a session about his first book, Ghost Empire.

“This writing business is such great fun, Stephen,” Richard bubbled.

To which, Stephen author of 40 books, replied with a smile, “Welcome to the club, Richard.”

Richard’s wonderful history of the Byzantine Empire and the legendary city of Constantinople was well received, as was he. Try his podcast interview with Scott Stephens, editor of the ABC’s Religion and Ethics website. It shows Richard’s passion for history, and his deep love for his son Joe, whom Stephen and I have watched grow up. It also captures the essence of a very fine writer.

My next most memorable identity? Thordis Elva from Iceland, a young Hollywood-style beauty with perfect English and an alluring accent whose attendance was supported by the Icelandic Literature Centre. Thordis wrote Forgiveness, which tells her story of being raped at 16 by a young Australian exchange student with whom she has since re-connected, keeping in touch by correspondence, and, has now forgiven. They courageously appeared together on stage to discuss this intriguing story.

Thordis proudly volunteered to me that her name means Lightning Goddess, while exuding a confidence that only the young can possess. She also sports a T-shirt emblazoned with the message ‘Don’t Care.’ Says a lot, without saying a lot.

I had breakfast beside the beach at Glenelg with British crime novelist Peter Robinson. An easy bloke to talk to, he writes about solving crime with his creation DCI Banks, the working class cop in a tiny town outside London. Five seasons of television have made the DCI BANKS name familiar to us all. When I asked whether Stephen Tompkinson was his choice to play the detective, he answered in the negative. He imagines Banks to be stockier, shorter… perhaps a bit more like himself.

I had heard other crime writers say they work backwards when they write their books, coming up with the conclusion first. But not Peter. He never knows what’s going to happen to his characters. But he did tell me that whenever he walks in the moors or strolls through new places, he says to himself, ‘”Now that would be a good place to find a body.”

A most attractive young lady with an endearing, mischievous voice, whose appearance on the festival program was supported by the Embassy of the Federal Republic of Germany, was young Giulia Enders, who wrote Gut. I was quite taken aback by how entertaining a tour of our digestive track could be in the hands of a doctor who is also a talented writer.

Giulia’s book is revolutionary, because scientists now marry the nerves of the gut to those of the brain, and blame poor gut health on such things as depression, suicide, immune diseases, and obesity. Giulia seems to be in love with the body’s vital organs, and calls them “good dudes and bad dudes” as she explains their role and that of the different bacteria in the gut.

Sharing a courtesy bus, we met Australian crime writer Barry Maitland and his lovely wife. They live in, wait for it, Maitland, NSW. A town named after you? Every writer’s dream. Barry, author of The Belltree Trilogy, featuring homicide detective Harry Belltree, warned us that if we were to tackle a trilogy of books, to be precise and thorough in mapping out all the murders from start to finish before even tackling the first book. Because, once the first book is published there’s no going back. Barry found an error in the third book that even he could not mend – he had already killed-off one of the key players. 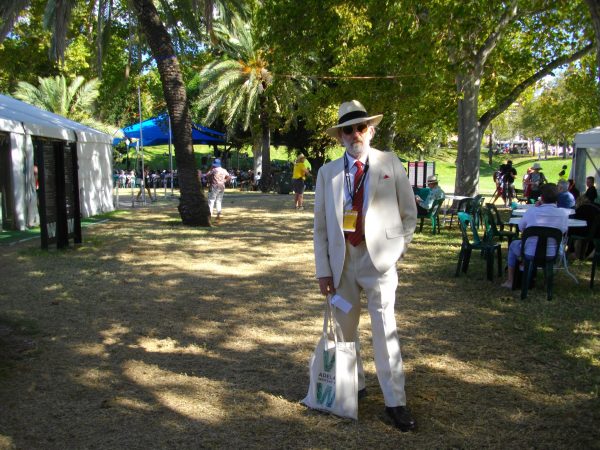 As for my Stephen, novelist, historical author and biographer, the only Tasmanian on the programme, he spoke at AWW about The Hero Maker, his biography of Australian author Paul Brickhill, and about The Big Break, his latest American book. We were also quietly celebrating screen options on two of Stephen’s other books, one with Australian producers, the other with Hollywood. Coincidentally, both deals were finalised by Stephen’s New York literary agent while we were in Adelaide.

By the way, you never know who will be in your writers festival audiences. A proud family in Stephen’s audience went to the Q&A mic to tell the crowd that their grandfather was Andrew Geddes, who put together the plan to feed the starving Dutch nation from the air in 1945 with cooperation from the Nazis, as told in Stephen’s 2015 book Operation Chowhound. They received a big round of applause. And one of the people who mobbed Stephen following his session gave him a gem for his next book.

AWW continued to be full of surprises. At the festival’s farewell party I again connected with Dr Peter Goldsworthy, AWW chair and prominent author. After being given my novel Kato, the story of a ‘humanized’ chimpanzee that is sent back to the wild in Tanzania, Peter suggested I read his novel Wish – about human sign language teacher JJ and a biologically engineered gorilla. JJ is the son of deaf parents who teaches ‘Eliza’ to sign, and from that relationship a passionate romance develops. Peter’s book has been described as ‘stylish, poignant and hugely unsettling.’

So, there it was; a week in writers’ heaven. There is no doubt about it, Adelaide knows how to Festival! Large, receptive crowds, big book sales, champagne breakfasts, pizza nights, and grand farewell parties make for very happy authors.