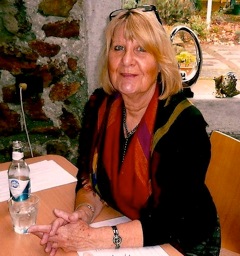 Robyn Friend has more than 30 years experience working with writers at all levels and across all genres. Her own published works include fiction, faction, articles essays and reviews. Her first short stories appeared in the late 70s and early 80s in The Canberra Times, Nation Review, Overland, Island, Inprint and various other newspapers and journals. A first novel, the highly commended Eva, (Penguin) was published in 1984. A number of oral history collections and a second novel, The Butterfly Stalker, followed.

As well as continuing to write, Robyn has worked as a community writer, oral historian and State Literature Officer. She has held a number of grants and creative fellowships, served on both Australia Council and Arts Tasmania panels, and as a judge for the AusLit Gold medal award. As a writer in residence she has toured and taught nationally and internationally. She has been a guest writer in the UK, India and Canada. In 2002-3 she was the Asialink Literary resident in Northern India.

Robyn first began writing in Western Uganda when she and her young family were caught up in Idi Amin’s reign of terror. Many years, a variety of publications and various jobs and countries later, the family settled in Northern Tasmania where she still lives, writes and teaches.