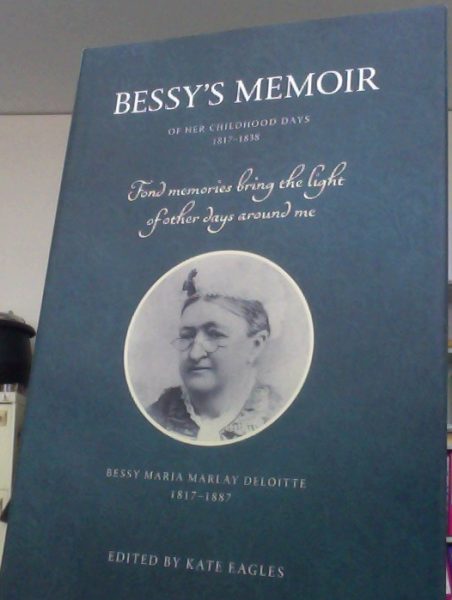 Kate Eagles, secretary at TasWriters, recently published the memoir of her great-great grandmother Bessy Maria Marlay Deloitte, a project she undertook for her English Honours thesis at Utas in 2018. Arianne recently chatted to Kate about the book’s journey.

Excerpt of back cover blurb – “In 1817, when Bessy Maria Marlay was born, Britain was recovering from the Napoleonic Wars and was about to enter its age of imperialism. Bessy, as the daughter of an Army major, spent her childhood in various countries: Ireland, England, Scotland and Gibraltar, which were so different 200 years ago than they are today. This is the fascinating story of Bessy’s growing up in a large, genteel family during the Regency period. She describes her visits to castles and other places of note; her social round of balls, parties, picnics and concerts, and even living in the Tower of London for a time, when her father had military duties there. It is a personal account of a time of great change, from sailing ships to steamships and from horse-drawn vehicles to trains. Bessy’s eye for detail and gift for storytelling draw readers into her life as she moves into adulthood. We feel the loss when a family tragedy strikes; get a front-row seat at Queen Victoria’s ascension to the throne, and finally, sail with Bessy and her family to Australia to begin a new life very different from the one they leave.”

Can you tell me a bit about Bessy, to set the scene of this story for new readers?

Bessy, my great-great-grandmother, came to Australia with her parents and some of her siblings, in 1838. Her father’s occupation was “barracks master” and he had been offered this position in Sydney. Bessy was her father’s first-born child and from her Memoir, they had a close relationship. Her father married a widow with five children, so Bessy was born into a large family—her parents had five more children, but none born in Australia. At the time of their arrival, the young queen Victoria had just ascended the throne, so it was the beginning of a new era.  Bessy herself was just turning 21 and married only months after she arrived in this country. However this life-changing is not mentioned, as this is a “childhood” memoir, in which she describes her early days on the island of Guernsey, then growing up in various countries, including Ireland, Scotland and England.

Did you discover anything particularly unusual throughout the process of compiling your ancestor’s memoir?

This is a memoir of her childhood, dictated or handwritten by Bessy when she was in her sixties, from journals or diaries that she kept all her life, but were destroyed, at her request, at the time of her death. As she explains in her Preface, her son George had asked her to write down her childhood memories for the family and this is her response to that request (13th May, 1878). So, I have to say, Bessy’s Memoir was written by Bessy, not compiled by me. It was typed up, either by George or another family member, probably in the 1880s, about the time the first typewriters were invented. A handwritten copy no longer exists. However, to answer your question, I found Bessy’s recounting of living in the Tower (of London) with her father while he had military duties there, most unusual, as I didn’t realise people actually lived there! I thought it was amazing to read an account of how female convicts really were treated on board a convict ship (Bessy and her family were paying passengers) en route to Australia, from an eye-witness!

Do you feel closer to your great-great-grandmother after editing her memoir?

I didn’t edit Bessy’s Memoir very much at all, as I considered it an historical artefact, one that she herself had written and therefore should not be ‘edited’ or ‘amended’. I even made sure her original title, ‘Fond memories bring the light of other days around me’ was retained. However, I reduced the capitalisation in her text as Bessy, like most literate people in those days, capitalised much more than we do today–proper names, family relationships (eg ‘Brother’), many nouns—just about everything! (this may have been a mistake, as it would have read more like a ‘period’ piece if I had not reduced the capitalisation).  I did do quite a lot of research on place names (including battles that her father participated in) and people that Bessy mentioned, and what I discovered I put as footnotes to assist the reader. There are footnotes on almost every page. Yes, after such close work on the Memoir, I suppose I did feel ‘closer’ to Bessy—I found she was what we call ‘a snob’ or ‘name-dropper’ but that’s what people (especially women) were like in those days; ‘connections’ were very important. I realised that, like me, she had a love of reading, a fondness for history and a ‘nose’ for a good story—her descriptions of the local Irishmen when they ‘had the drop in’ and an Irish funeral that went horribly wrong make for entertaining reading!

What did you discover on this journey that you didn’t expect to?

By looking through newspapers of the time as part of my research, I discovered the criminality of the captain of the John Renwick, the convict transport ship that brought 172 female convicts—and the Marlay family as paying passengers—to Australia. It was not mentioned by Bessy in her Memoir (she may not have known it even occurred). Captain John Byron had the entire ship on short rations on the outward bound voyage, as he hid food on board to sell in England after the return journey. Rumours and complaints swirled about the captain in Sydney when the ship arrived in Sydney, so much so an investigation was made by the Governor. The captain was charged with embezzlement at the Old Bailey, London, in November 1839 and eventually fined and jailed. I put this story at the back of the book, as Appendix 7.

What was your favourite and most challenging part of editing this book?

Hard to say, but possibly hunting down the origin of music (for acknowledgements) and finding the correct spelling of people’s names and of battles. Bessy spelled phonetically, as most people did back then (spelling had not been standardised), so to begin with it was difficult to assess the accuracy of Bessy’s memories (and the diaries I believe she kept). Was she making it all up, or some of it, or was it a true account? Where were these places she talked about? While doing the research on this (more so than the light editing), I learned a lot about the Napoleonic war as it related to the Spanish theatre and Bessy’s father’s part in it (he was wounded at the battle of Salamanca, after which Hobart’s Salamanca Place is named). Eventually, I found to my satisfaction that everything she said was true—except the number of convicts on board the John Renwick. This may have been a typo in the manuscript or perhaps she really didn’t know. Numbers may not have been her strong point (as with me).

Can you talk me through the process of editing it?

I looked on the internet for ‘publishers’ and ‘printers’. I thought about finding a local printer, but was not enthusiastic about this, as most printers want ‘print ready’ manuscripts and I didn’t know enough about the actual nuts and bolts of preparing a manuscript for publishing, that is to say, the designing and typesetting.  I wanted to do the right thing by Bessy and I wasn’t getting anywhere, so I went to bed to ‘sleep on it’. When I woke up next morning, there was a delightful little blue wren pecking at my window. After breakfast I went to my computer, this time looking up ‘book designers, publishers’ and Bingo! Up popped ‘Blue Wren Books’ with an invitation from Helen Christie to get in contact. We spoke on the phone; I found she was at Mt Evelyn, on the outskirts of Melbourne. That was in March and I knew I would be in Melbourne on family business , so we arranged to meet. I discovered she had done design and typesetting for other memoirs and had a good relationship with a nearby printing business. From then on, through the year, we communicated through emails until finally at the beginning of May, the first 30 books arrived. I had forty-five printed altogether.

Initially, I tried to go via ‘Lulu’, a self-publishing online program. This was a disaster for me.  I would not recommend it. So then I looked for someone to assist me in the process. My advice is to have the manuscript as good as you can make it. Mine was in Times New Roman, 12 point, double-spaced, no spelling errors (don’t ever trust “spell” checker!), thoroughly researched, footnotes at bottom of each page (although they can be endnotes instead). I was lucky to have family and rellies (other Bessy descendants) to stump up money for the design and printing. Helen Christie was very easy to work with and made good suggestions as to the appendices, which included the family tree, timeline and facsimiles of documents such as marriage certificate, newspaper articles, examples of handwriting and a letter from Bessy’s father to his bosses at the Ordnance Office.  I found Helen to be a  brilliant designer, who designed the dust cover, main text typefaces,  front and end papers and much more. At all stages she consulted with me as to whether any changes met with my approval.

What was your favourite part of your Honours year at Utas?

It is difficult to say what was my favourite part: I liked spending time with creative, enthusiastic people who are passionate about books and writing. I enjoyed getting face-to-face feedback on one’s work (almost gone these days of ‘covid’). Learning from lecturers and tutors who are also authors and editors was invaluable.

Do you have any plans for other books, and would you do anything differently the second time around?

Yes, I am now working on a biography/historical non-fiction work about Bessy’s husband, Captain William Salmon Deloitte, who was an adventurer, master mariner (sailed around the world 6 ½ times), a successful whaler, merchant and marine assessor. He was the first to (officially) set up trade between Australia and New Zealand, in 1827—a time when there was still slavery and cannibalism in New Zealand! What I would do differently is to make sure one has a proper ISBN for the book.

Has this book inspired your family members to embark on a similar process?

No, not that I am aware of, although I do have a family member who is a genealogist and keeper of the family records. She gave me a great deal of help and encouragement.  I am now enrolled in the Diploma of Family History through UTAS, and I know there are a lot of people around Australia researching and writing family histories and memoires.