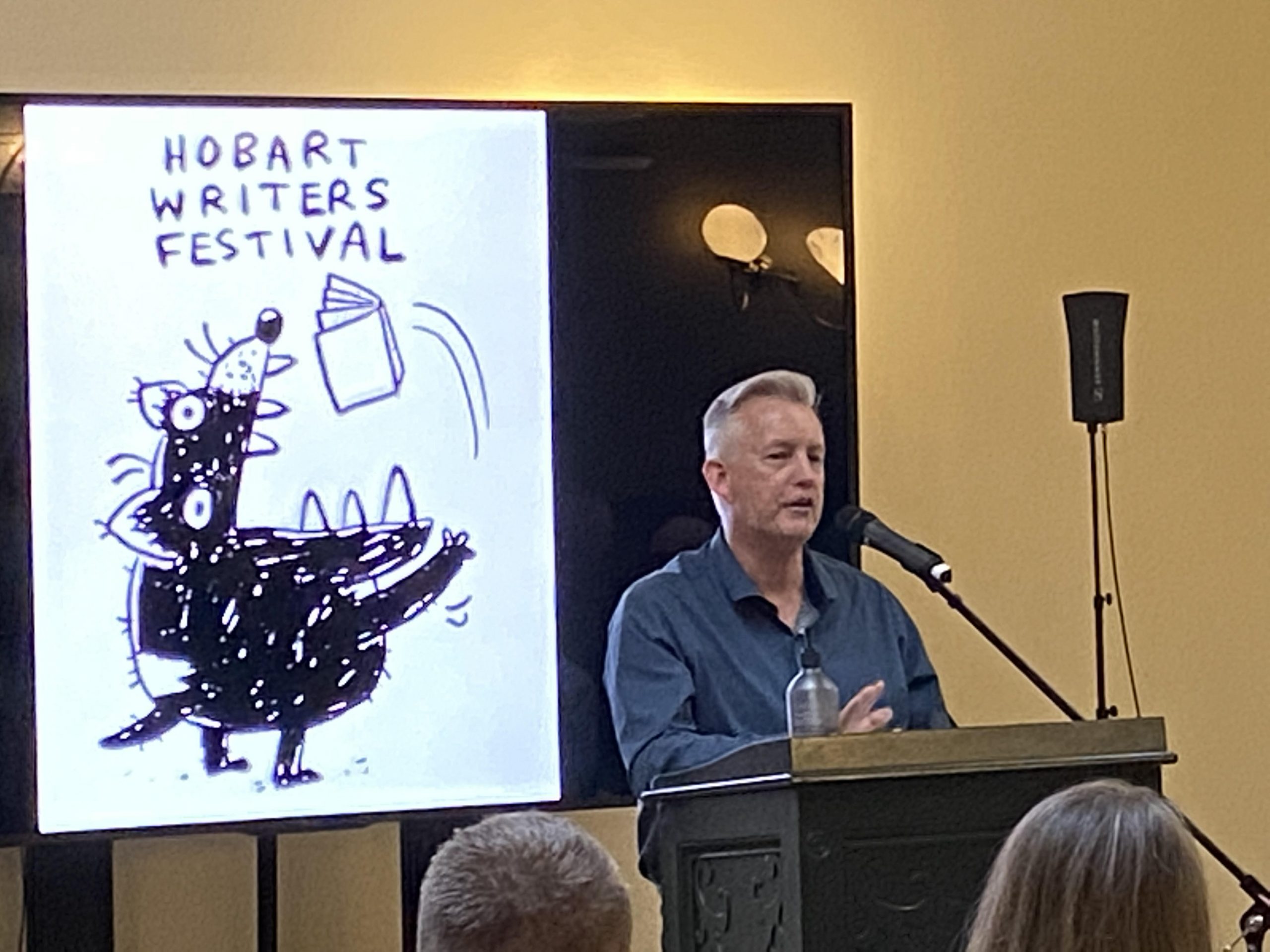 Tasmanian writer Colin Baldwin is the author of A Soldier’s Quartet, which was recently nominated for the 2022 Miles Franklin Literary Award. To celebrate this wonderful achievement, Arianne asked Colin some questions about where the idea for his book came from, and his writing process. 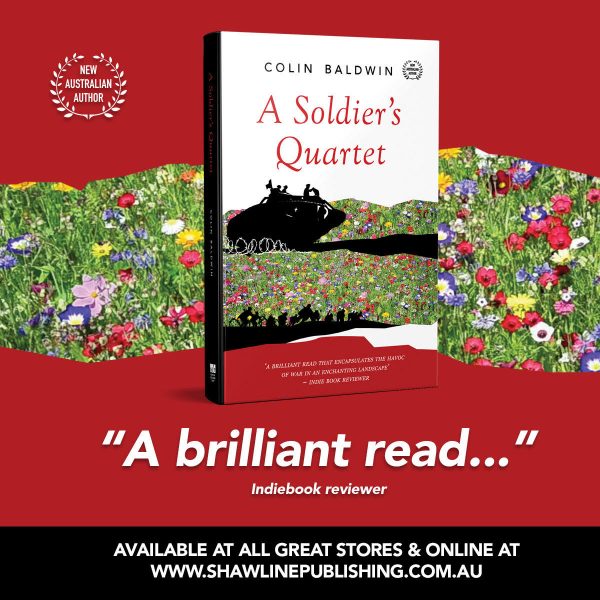 Can you start by telling me a bit about how you came across the letter that inspired this story?

A sequence of events – When I retired, I joined a bushwalking group. A member got to hear I was interested in improving my German and recommended I join U3A where I met a German-born history enthusiast who also volunteered at the Army Museum of Tasmania translating German documents and letters – some brought back as souvenirs from the First and Second World Wars. He showed me the 1918 letter, now named ‘the letter of fate’ by the German family, because he knew I wanted to improve my German and interested in the human stories from history.

How did you go about approaching publishers?

At first, like a scatter gun approach. I really didn’t know much about the ins and outs of the publishing world and just sent off the manuscript in the hope of getting some response – good or bad.

At the time, many of the mainstream publishers were closed off to submissions due to COVID-19. Predictive text cruelly changed Hachette to Hatchet in my submission email, therefore it was no surprise to me that I received no ‘yes or no’ reply from them!

After receiving four acceptance replies, I panicked and set about researching the difference between traditional and hybrid publishing contracts. As expected, the internet was full of pros and cons for both. It appears securing a traditional publishing deal for a first-time author is near impossible, but hybrid contracts don’t appear to have the bad name of the past. I found a useful industry checklist when considering hybrid publishers.

I decided to stay within Australia and chose an indie publisher – Shawline Publishing Group Pty. Ltd., in Melbourne – and have been very pleased with the outcome.

Did you enjoy reading as a child? What were some of your favourite books?

I’m embarrassed to say no, I wasn’t what you would call an avid reader if compared to my children, and now my grandchildren. At least one grandchild is rarely seen without a book in her hand wherever she goes!

I can recall reading Ivanhoe and the Famous Five series, but didn’t get enthralled.

In 1964, when I was four years old, my grandparents gave me ‘Colin the Cowboy’ by Enid Blyton. I still have this book, it is dear to me, and at one time could recite it word perfect. Ah, the innocence of it all! 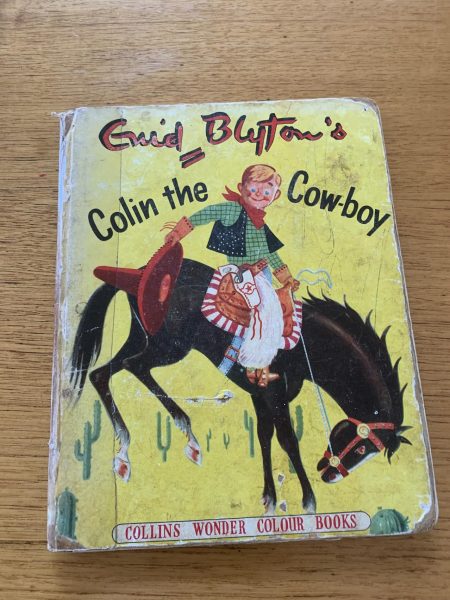 Had you ever thought of becoming a writer before you found the letter?

I vaguely remember writing something of fiction in my early twenties, but it never amounted to anything. I really don’t believe I would have written ‘A Soldier’s Quartet’ had it not been for the ‘letter of fate’. The letter and its contents more or less compelled me to write.

What was the most enjoyable and most challenging aspects of writing this book?

The most challenging task was walking the tightrope between fact vs. fiction/real vs. fictionalised characters, and checking in with these real characters that I have portrayed them authentically.

For some who know me, it could be quite exasperating trying to figure all this out. My recommendation is to just fall into the story and not try and second guess anything in it.

At times, I was fully emerged in the characters and the storyline. That was a joy, yes. This took me away – both in time and awareness. I could visualise the places – some in Europe I had visited, others from photographs and the big screen.

When the book was submitted to Shawline Publishing, the waiting period created an opening for me reflect, then compose a string quartet based on the main themes of the book: Friendship, Battle, Loss/Guilt/Redemption, and Returning Home.

This quartet was performed at the official book launch during the Hobart Writers Festival – and I thank my ‘recruits’, Christopher John, William Newbery and Brett Charles Rutherford, for making it come alive.

Like being a first-time writer, this was a joyous achievement in my life and mended a nagging loose threat that I felt after finishing the story. 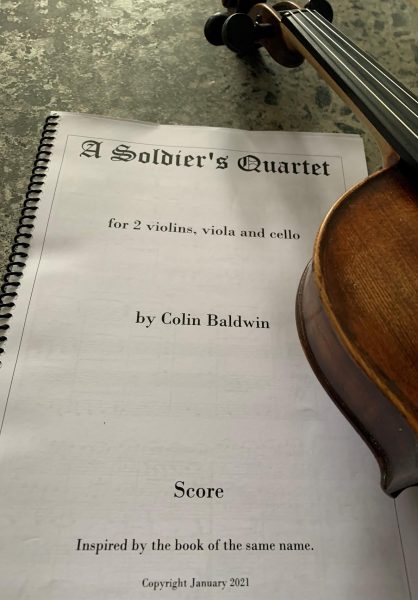 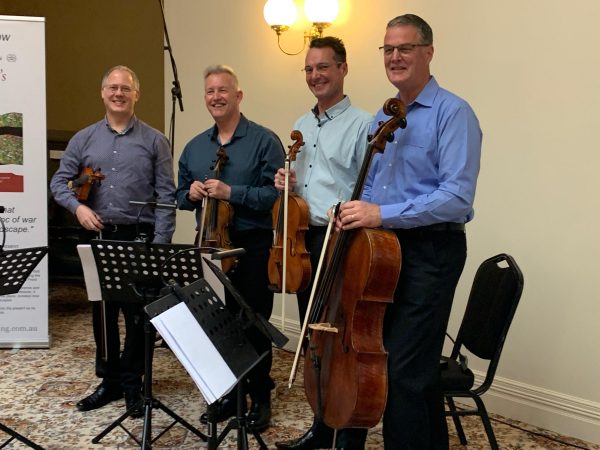 What books were you reading while writing this book?

Sadly, or maybe fortunately, only books related to my research, both in German and English, including a day-to-day account of the German soldier’s regiment, which certainly helped me create that thread of the story; books about the Battle of Amiens 8.8.1918; and I also revisited Remarque’s classic ‘All Quiet on the Western Front’.

A joy. At times, a burden. Twists and turns, frustrations, late nights, early mornings. But that’s not meant to be negative – it was all worthwhile and rewarding. It’s truly amazing how far you can go on the internet – but need to back it all up as there can be traps. I also had help from various German and Australian individuals and organisations.

It must have been amazing to get into contact with some of the soldier’s relatives. Can you tell me about how that came to be?

This could be a spoiler! I do describe it in the book as it occurred.

Initially, I had written a factual, linear account of researching the letter and making contact. This did not ‘do it for me’, therefore I sought permission from the German family to ‘morph’ it into a story, a novel, with some embellishments. Thankfully, they consented, provided I respected their privacy and changed their names and place names – hence I became Conrad Bentley!

I have to confess, there were times I walked around thinking I was Conrad vs. Colin!

We had a pre-planned holiday to Europe in 2018, about six months after I made contact. We met up with them (as described in the book) and it was emotional and gratifying for all of us. We remain in contact.

Key members of the family have waded through the English version and provided lengthy, intelligent and balanced critiques.

Would you say you’re more of a plotter or a pantser?

I had the outline of the plot for A Soldier’s Quartet, given it was based on true events. I think I’m a combination of both.

Where do you write? Describe your space.

Mainly in front of the PC at home. I did place a notepad beside my bed – that was very helpful. A few times a week, I would jot down some ideas, questions, things to follow up and a couple of paragraphs in the park after I collected the grandchildren from school. The outdoor settings were my favourite!

Do you have any plans for future books? And would you do anything differently in terms of your writing process for those?

Yes, I’m told a writer never stops at one book. I do have some ideas to follow through with some fictional characters and themes from A Soldier’s Quartet. I admit, I am looking forward to leaning more to the fictional side of writing. However, the character based on me, Conrad Bentley, will need to be mentioned somewhere, somehow…

I’m not sure if the process will change. I predict I will still be on a bushwalk, mowing the lawns or doing some mundane and an idea will pop into my head and I’ll need to make a note of it. Making notes is essential – I have lost many brilliant lines by not immediately jotting them down!

TasWriters thanks Colin for taking the time to speak with us.