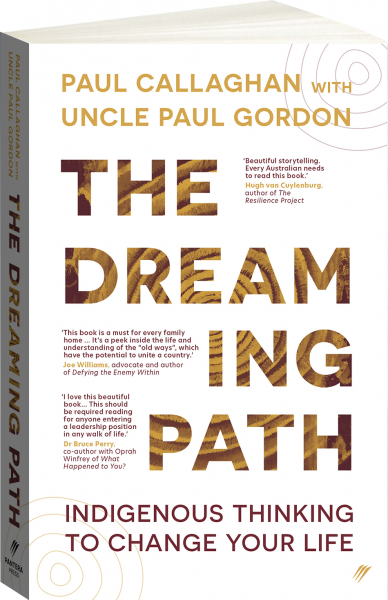 This book uses conversations, exercises and Dreamtime messages to reveal a path to ancient wisdom – wisdom as relevant today as it ever was. In our modern world with its incessant demands, it is easy to lose sight of the important things.

Paul Callaghan and Uncle Paul Gordon will sit you around the fire and share knowledge that reveals the power of Aboriginal spirituality as a profound source of contentment and wellbeing for anyone willing to listen.

The Dreaming Path brings together Aboriginal and non-Aboriginal world views in ways which coexist within our modern world. The book presents tips, practices, inspiration and motivation in a way that is easy to navigate,  inviting reflection and personal growth, healing and fulfilment.

Paul Callaghan is an Aboriginal man belonging to the land of the Worimi people, located on the coast of New South Wales just north of Newcastle. For many years he has held senior executive positions in Aboriginal- and non-Aboriginal-related service areas, but eventually his desire to focus on community and individual wellbeing compelled him to start his own business.

In addition to consultancy work, Paul is a motivational speaker, a storyteller, a dancer and an author. His first book, Iridescence: Finding Your Colours and Living Your Story, published in 2014, has received numerous, heartfelt testimonials from around the world. In 2019 his manuscript of a novel titled Coincidence was shortlisted for the inaugural Daisy Utemorrah Award. The shortlisting inspired Paul to undertake a PhD in Creative Practice, for which he has written a second novel, titled Consequence.

Paul’s passions are driven by his belief in the power of story to create a better world.

The Scarlet Cross by Lyne McFarlane Meredith Griffin oversees the emergency department at St Jude Hospital. A specialist in psychiatric nursing, Meredith is also adept at hiding her own problems – and solving everyone else’s.

When women bearing the same fatal injury begin appearing in Meredith’s emergency ward, their deaths are classified as suicides. But Meredith isn’t convinced. With the help of Detective Leo Donnelly, she begins an investigation to verify that these women were the victims of homicide. As the stakes rise and pressure mounts, questions are raised about why the women were targeted – and why the hospital is so determined to cover things up.

In a struggle against addiction, self-doubt and a corrupt organisation that may be protecting a serial killer, Meredith finds herself in the centre of a network of powerful people – all of whom are desperate to protect their privilege and keep her from the truth.

‘A tightly-woven plot, complex and intriguing characters and suspense that builds to fever pitch before delivering one last sucker punch. An original and compelling journey into self harm, mental illness, the role of carers and how power corrupts. Even those who swore to do no harm can become monsters.’ Loraine Peck, author of The Second Son 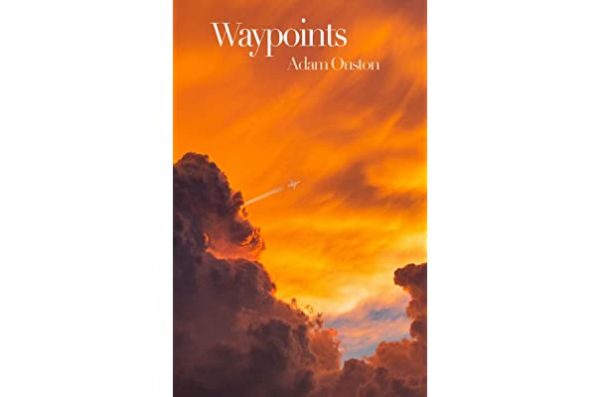 Waypoints is Adam Ouston’s debut novel – and he takes us on a wild ride, at once hilarious, awesome, surprising and poignant. In 1910 Harry Houdini attempted to become the first person to fly an aircraft over Australian soil. An attempt that ended in failure. Bernard Cripp, a jaded scion of an ailing family circus, becomes obsessed with this failed venture. Grief for the wife and child he has lost to the skies drags him into a compulsion to recreate the fateful flight in an attempt to make some sense of his loss.

This novel draws the reader through topics ranging from Victorian vaudeville, cutting-edge data storage, the early history of Alzheimer’s disease to the immortality of human consciousness. We are carried along in a meditation on time, technology, life, love, and so much more.

Adam Ouston is a writer of fiction and non-fiction, and the recipient of the 2014 Erica Bell Literary Award as well as the manuscript prize at the Tasmanian Premier’s Literary Awards in 2017. He holds a PhD and has worked as a copywriter, editor and bookseller. As a musician he performs as Costume. He lives in Hobart, Tasmania. 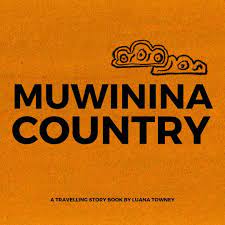 Muwinina Country is a travelling book that tells the story of the First Nations people of Nipaluna/Hobart, and their first contact with white colonisers. The story is a child friendly history lesson and is told in both palawa kani and English.

Luana Towney initially created this book as a temporary public art project, presented along the South Hobart Rivulet Track during NAIDOC Week in 2020. She wrote the story in collaboration with her daughter Jamaya Summers, who created the illustrations for this project.

Luana Towney is a Palawa Wiradjuri woman based in nipaluna. Drawing inspiration from her people, her culture and her Country, Luana is a painter, basket weaver, shell stringer, poet and photographer. She has most recently represented her people at the Darwin Aboriginal Arts Fair, selling echidna quill jewellery and paintings. She has also self-published a culturally appropriate children’s book about breastfeeding and motherhood and was the winner of the Emerging Tasmanian Aboriginal Writer award in 2020.

100% of profits from this book will be shared evenly between the Indigenous literary foundation and the Tasmania Aboriginal centre’s language program.
You can purchase Muwinina Country at Luana’s website Black Space Creative 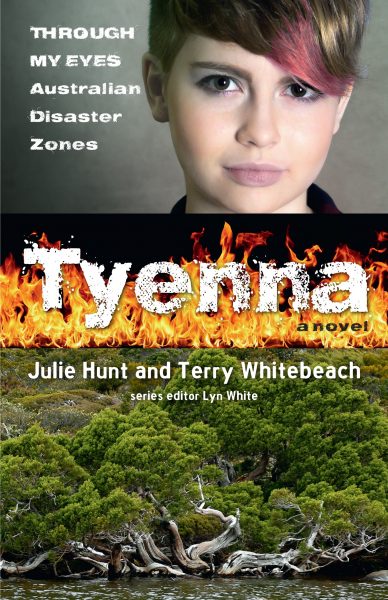 This story centres on Tye, who is spending  the 2019 summer holidays with her grandparents in Tasmania’s Central Highlands. Fire threatens her beloved landscape and the sensitive vegetation it supports. Tye encounters a runaway boy, who compels her to keep their friendship a secret.  Calls to evacuate escalate, and Tye is confronted with deadly decisions and choices.

In addition to the immediate danger Tye and the environment face, the question of what difference one person, or one community can make in the face of the global threat of climate change also underpins the book.

Tyenna is part of the acclaimed fiction series, Through My Eyes, which invites young readers to enter the worlds of children living in harrowing situations across the globe. This work draws on the catastrophic bushfires which swept across the Tasmanian highlands in the summer of 2019.

Julie Hunt loves storytelling and traditional folktales. Her stories combine other-worldly elements with down-to-earth humour. She loves travel and is fascinated by landscapes and the tales they inspire. This interest has taken her from the rugged west coast of Ireland to the ice caves of Romania where she collected ideas for her graphic novel, KidGlovz, illustrated by Dale Newman. KidGlovzwon the 2016 Queensland Literary Award and her latest novel, Shine Mountain, was shortlisted for the 2019 NSW Premier’s Award. She has received many awards and commendations for earlier books, including winning Readings’ inaugural Children’s Book Prize for Song for a Scarlet Runner in 2014 and the Children’s Book Council of Australia Picture Book of the Year Award for The Coat, illustrated by Ron Brooks, in 2013.

Dr Terry Whitebeach is a Tasmanian writer, historian and community artist who has performed, presented conference papers and taught creative writing in community, workplace and educational settings. Her publications include poetry, radio plays, novels for young adults and biographies or life histories. Trouble Tomorrow was her fourth collaborative project with Sarafino Enadio.

Series editor and series creator Lyn White has extensive experience as a primary school teacher-librarian and EAL teacher and in 2010 completed postgraduate studies in Editing and Communications at the University of Melbourne. Lyn is passionate about children’s literature and has great expertise in engaging students with quality texts. Her work with refugee children motivated her to create the acclaimed Through My Eyes series of books set in contemporary war zones. Lyn created and edited the Through My Eyes – Natural Disaster Zones series to pay tribute to the courage and resilience of children who are often the most vulnerable in post-disaster situations. Lyn continues to teach EAL and is an education consultant and conference presenter.

The Misadventures of Harry and Larry – The Chosen Ones by David Webby. 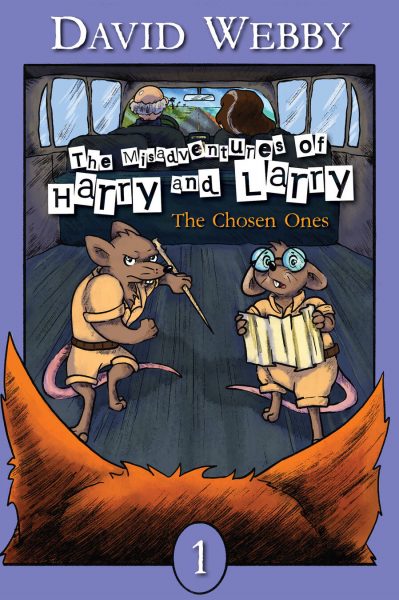 Harry and Larry, two bush Mice from the Bunya Mountains, accidently become trapped in Charlie and Izzy Humbledink’s Toyota 4WD, and begin their adventurous travels up the east coast of Australia. On their way, Wilmar, Queen Mother of the Humpback Whales, reveals to them a Prophecy that they are the Chosen Ones. What does this mean? Everyone they meet expects them to save Mother Earth. How can two simple Bush Mice change the way humans think and act?

With their human friends, Harry and Larry explore the lush landscape of the tropical north of Australia, survive some scary encounters with some local inhabitants, and call on skills gained in Mouse Scouts to get them out of trouble.

“A great collection of tales and thought-provoking story telling for the young at heart and in years…a treasure of Australian land and culture for generations to enjoy from the eyes of the mice…” Deanna, Indiebook reviewer.

After traveling all over the world before moving and living in Australia I’ve always had a passion for the creative arts, going straight into film and television for secondary education. After improving my skills for a few years independently, I came across University to advance my skills in filmmaking and Animation. I started working on a personal project on YouTube accumulating over 2.5 million views collectively with a fan base dedicated to my storytelling and character design. Having finished a Bachelor of Animation, I am constantly exposed to creative environments and learning more programs and methods while working in teams to be ready for industry.