Congratulations to Luana Towney on winning the 2020 Emerging Tasmanian Aboriginal Writers Award for her short story The Girl in Red. You’ll be able to read this, and the 2019 winning poem Blackscape by Kartanya Maynard, in the September issue of Island Magazine.

Special thanks to Jim puralia meenamatta Everett for presenting the award. 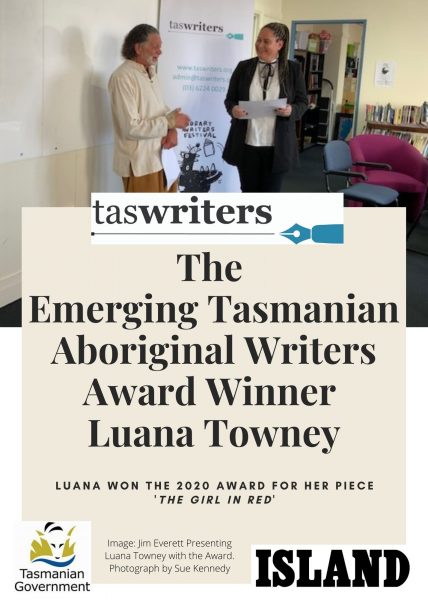 The: My Tasmanian Landscape and the judges were inaugural 2017 winner Adam Thompson, Jillian Mundy and Theresa Sainty.

TheTasWriters (then the Tasmanian Writers Centre) was delighted to announce Launceston-based writer Adam Thompson as the winner of the inaugural Emerging Tasmanian Aboriginal Writers Award (ETAWA) in 2017.

The award was presented at Hobart’s Theatre Royal, at the opening event of the 2017 Tasmanian Writers and Readers Festival and Hidden Stories program.

2017 entries, which were assessed by judges Bruce Pascoe, Julie Gough and Jillian Mundy, addressed the theme: Reflections on being Aboriginal in Tasmania today.