Australian Recent Release: A Room Made of Leaves by Kate Grenville. 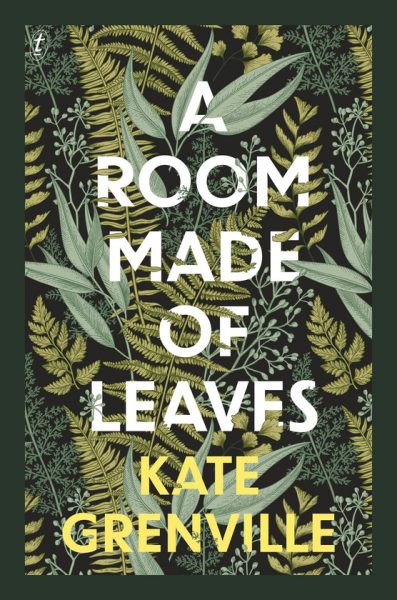 In A Room Made of Leaves, her most recent novel, Kate Grenville re-imagines the life of Elizabeth McArthur, wife of John McArthur, notorious bully and wool baron in the early days of Sydney’s colonial history. Grenville ponders whether Elizabeth had written a secret and outrageously bold memoir.

Grenville’s readers are given a fascinating insight into what one of those stereotypically demure women from history truly thought. We watch Elizabeth McArthur, stuck in a difficult marriage and a society that takes every opportunity to silence women, as she navigates the desires of her heart and her complicated life with passion, wit, cunning and spirit.

As much a journey back in time as it is timely, at the heart of this novel is one of the most rife and harmful issues of the modern age: the alluring appeal of fake stories. 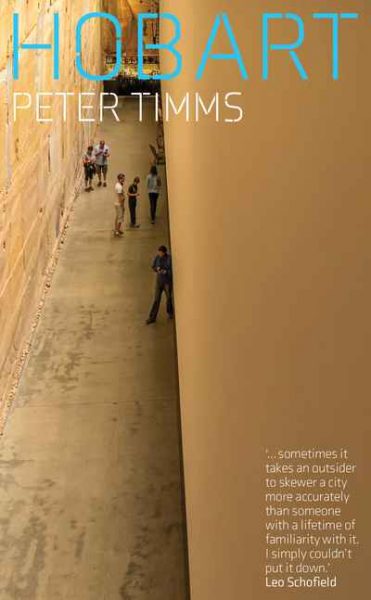 “Sometimes it takes an outsider to skewer a city more accurately than someone with a lifetime of familiarity with it. I simply couldn’t put it down.” Leo Schofield, The Mercury.

Peter Timms takes us on a journey through Hobart, his adopted city and Australia’s smallest, most southerly, least wealthy but arguably most picturesque state capital. Timms explores everything from Hobart’s convict past, incredible wilderness and heritage architecture to crime rates, economic hardship and new developments, not to mention Mona, which he describes as having done far more than simply rescue a slumping tourism economy. Mona has, he states,”changed the city’s body language, teaching it to stand up straight and look others squarely in the eye, even putting a swagger in its step.”

Kids Recent Release: The Carbon-Neutral Adventures of the Indefatigable EnviroTeens by First Dog on the Moon. 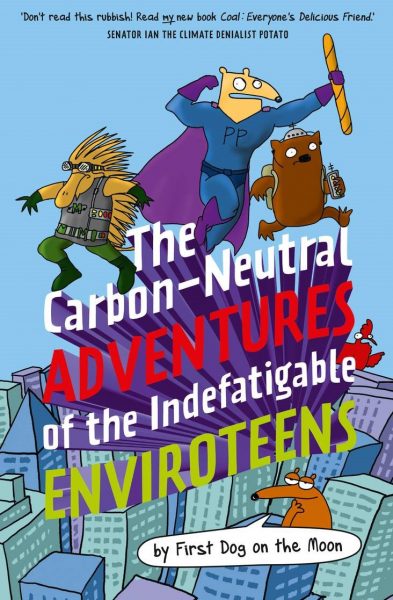 A hilarious, illustrated and environmentally-friendly adventure from the country’s enormously popular and only marsupial Walkley award-winning cartoonist and soon to be beloved children’s author.

Together, they make up the EnviroTeens and they are soon to be extremely angry. Singleuse Plastic Brendan has a dastardly plan to destroy all the world’s turtles with his tur-tele-pooter. If this wasn’t horrible enough, there is something even more sinister afoot… climate change! The EnviroTeens will do anything to stop this imminent disaster: traverse perilous volcanoes, scamper through forests full of deadly armpit monsters, even meet Senator Ian, the Climate Denialist Potato. But is it possible for three teenagers and a chicken to save the whole world? Why not? Nobody else is! Maybe they do have a chance….

“Totally hilarious. I loved it. And the environmental message is what all my friends and I want to see adults fighting for. You are a good adult … Gold star for you.” Maggie, 12 years old – Allen and Unwin.

A proportion of the publisher’s profits will be donated to School Strike 4 Climate Australia.

Tasmanian Classic: The Language of Water by Anne Collins.

“ . . . the Language of Water traces an odyssey, a journey at once mythic and breathtakingly individual. Anne Collins melds lyric and narrative forms as she fuses inner and outer worlds, capturing life in a net delicately woven from, among many threads, alluring water imagery. “ Kathryn Lomer.

This stunning collection of poetry features six coloured photos of paintings by Marianne Stafford that were completed in response to Anne’s poems.

The stillness was all sea-breath that day,

The brink was temptation, her arms lifted like wings,

she wanted to glide like an albatross across the fetch,

over the trackless deep that might drink her down

four thousand metres to the undersea of nymphs, the benthic realm.

Excerpt from the poem The Meeting of Currents in The Language of Water by Anne Collins.