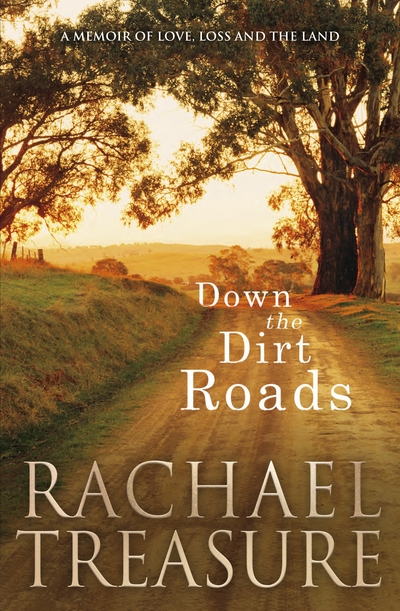 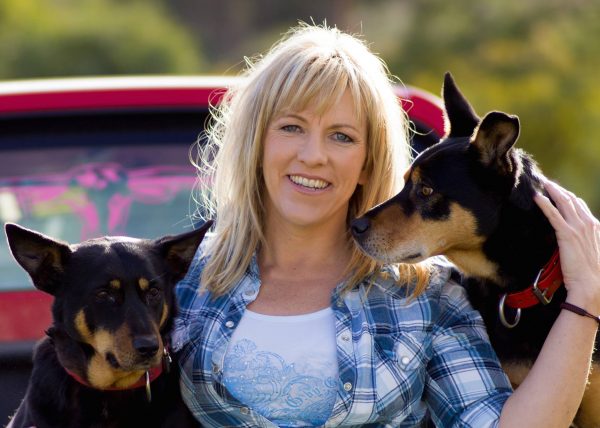 Congratulations on the publication of Down the Dirt Roads, Rachel! How has your launch tour been going?

The tour was sensational. I spent most of my time in regional South Australia and Western Australia with large audiences and a sell-out on books in most places. The important thing for me was seeing the women in the audience nod in agreement when I spoke about the need for change in our food productions systems so we honour both Mother Earth and mothers who are trying to feed children with pure nutrient dense food. On this tour the urban media are taking notice of what I have to say so my interview schedule was intense and include city-centric publications like ‘The Age’. The book is creating quite a buzz!

Can you tell us a bit about the process of writing memoir, and how that differed from your usual genre of fiction?

Most of my fiction works have a large dose of non-fiction in them, based on soil science, the latest in regenerative agriculture and human sciences such as epigenetics. For example in my most recent novel, Cleanskin Cowgirls I set the romance beside the sewage ponds. This was part a reaction to being labeled an ‘outback romance writer’ and also because our farming systems could be revolutionised if we were to use natural gas generated from methane ahead of fossil fuels. A woman who read Cleanskin Cowgirls has since ordered a small bio-digester tank to create fuel for her equipment on their farm, so fiction and non fiction are intertwined in my books. Down the Dirt Roads contains my areas of passion, including soil science, carbon sequestration, low stress stock handling, dog psychology and native grasslands. These are all themes present in my novels too. The major difference was the structure as instead of having an overall story arch, each non-fiction chapter was a stand-alone piece.

Did you involve your children at all when you were writing – run things past them or ask for their thoughts?

Oh yes! Definitely! We would all sit in my big writing armchair and I would read them out each section, then we discussed other areas to add. All my writing is a collaboration with my kids. My daughter and I brainstorm plots for stories as we drive to her school. In Down the Dirt Roads I wanted the children to be involved in the crafting of the book, so it was infused with love and positivity – despite the divorce and the devastation we three shared in never farming together on my childhood farm. The children know the book is part of the bigger picture in getting the message out about healthy soils into the world. We know our rather rough journey has been the catalyst for a greater good and we are so passionate about regenerative farming practices and bringing ecological health to any patch of land we live on.

Do you think Australia, and specifically Tasmania, are good places to be a writer?

Tasmania is an ideal place to be a writer. I turned my academic learning in journalism at Bathurst’s Charles Sturt University into very solid practical skills when I became the solo reporter and photographer on the Tasmanian Country newspaper. The workload and job requirements presented so many more challenges than a junior reporter would’ve had on an urban newspaper. I also secured a mentorship with the Tasmanian Writer’s Centre with genius writing teacher Robyn Friend. Because of that calling card, my first novel Jillaroo was picked up off the slush pile by Penguin on its first submission. A Tasmanian rural upbringing can also deliver a humbleness and humility needed to generate a reputation as being an easy person to work with over a long period of time especially in the big companies on the mainland and internationally. Tasmanians also don’t have our imaginations hemmed in by too-loud advertising in cities and tall buildings. Gazing across a vast Tasmanian vista helps open a creative mind.

And is it a good place to be a farmer?!

Any place is a good place to be a farmer if you can approach farming with an ecological foundation that mimics Mother Nature so it makes your business more economical and your produce more nutrient dense. We think Tasmania is ‘clean and green’, but in Tasmania I see the worst of over grazing, the soils laid bare and blowing away. Even in the north in the vegetable growing areas, the rich red dirt is affected by the bi-products of World War II which are now the basis of our farming systems. The fungicides, pesticides, herbicides and artificial fertilisers are destroying the microbiology of soil and killing Mycorrhizal fungi, which is the very fungi that plants depend upon to get nutrients. The government claim it’s a great thing to invest in big irrigation schemes but they don’t realise the chemical dependent monoculture cropping we do is devastating to soil and human health. That’s the beauty of Down the Dirt Roads… it’s opening people’s minds up to seeing the landscape in a different perspective and presents farming change towards to a healthier way, no matter where you are in the world.

You’re very passionate about issues around sustainability in agriculture and healthy eating – Down the Dirt Roads does a great job working through some of these issues – but do you have plans to take on any kind of activist role outside of your writing?

I am first and foremost an activist, and that’s why I took on writing in the first place. At university I did several studies on the stereotyping and clichéd way rural issues are reported – or in most cases, not reported by urban media and how rural issues are not fully understood by city-centric politicians and bureaucrats. Jillaroo was an answer to that – putting contemporary rural women and our issues under the noses of urban people. Each subsequent novel has a core theme – be it restoring landscapes through grazing, to reducing bushfires using native summer growing grasses. Many of my long term readers have altered their beliefs and even their farming practices due to the storytelling within my books. ‘Down the Dirt Roads’ will be the leverage I need to tour as a speaker with the regenerative farmers I’ve been working with for the past six years. Incidentally I don’t use the term ‘Sustainable’ as what we are doing with the land now is far from ‘sustainable’ – our soils are badly damaged since white settlement so we need to regenerate them.

In an interview with the Daily Telegraph last month you mentioned that you were waiting to hear about an offer on a house – any good news?

We get the keys on Friday to a new place to live that has 10 acres of tired, conventionally managed land. It’s a chance to do some benchmark soil tests, then the kids and I will get out our electric fencing and start to regenerate the soil and biodiversity of the land using time controlled grazing. We are hoping it will become a showcase as to what is possible on small acreage. We also hope to get back into training working dogs and teaching low stress stock handling. Exciting times ahead!

I write on a lap top in a giant armchair called Hemmingway, propped up with pillows… or on the couch, or a café, and even the ute if I’m on a deadline. It’s my business and how I feed my family so I work as soon as I’ve done the school drop off until pick up time. Sometimes I write from 5.30 am until it’s time to get the kids up. It’s relentless, and we live on a very, very tight budget, but I wouldn’t have it any other way as I can down tools and be there for my children and animals at any time they need me.

I mostly read non-fiction for my work – but some of my favourites include Bill Bryson, Alexander McCall Smith, Michael Pollan and I love all things with an Aussie flavour, like Les Murray, Miles Franklin and Kate Grenville.

The most recent novels I’ve read was Mark Lamprell’s The Lover’s Guide to Rome and for a true holiday from thinking… Mount by Jilly Cooper.

I’m about to dive into rewriting a manuscript I wrote before Down the Dirt Roads. It’s a novel called White Horses and is about a livestock contractor’s daughter who falls in love with a Hawaiian surfer lad. It will showcase the utopia in farming that can be created using some of the methods my colleagues are coming up with in ecological farming. It’s also an exploration in contrasting the Western, economic, technological market-driven view of the world versus the ancient feminine wisdom of Australian indigenous, Hawaiian and Native American cultures. I can’t wait to start again on it after we move house!

Thanks so much for taking time out of your farming, family and fiction-writing life to chat with us!

You can connect with Rachael through her website or Facebook page. Down the Dirt Roads is one of our recommended reads for December, and we have a copy up for grabs in our competition. Check out the Recommended Reads page for more details.