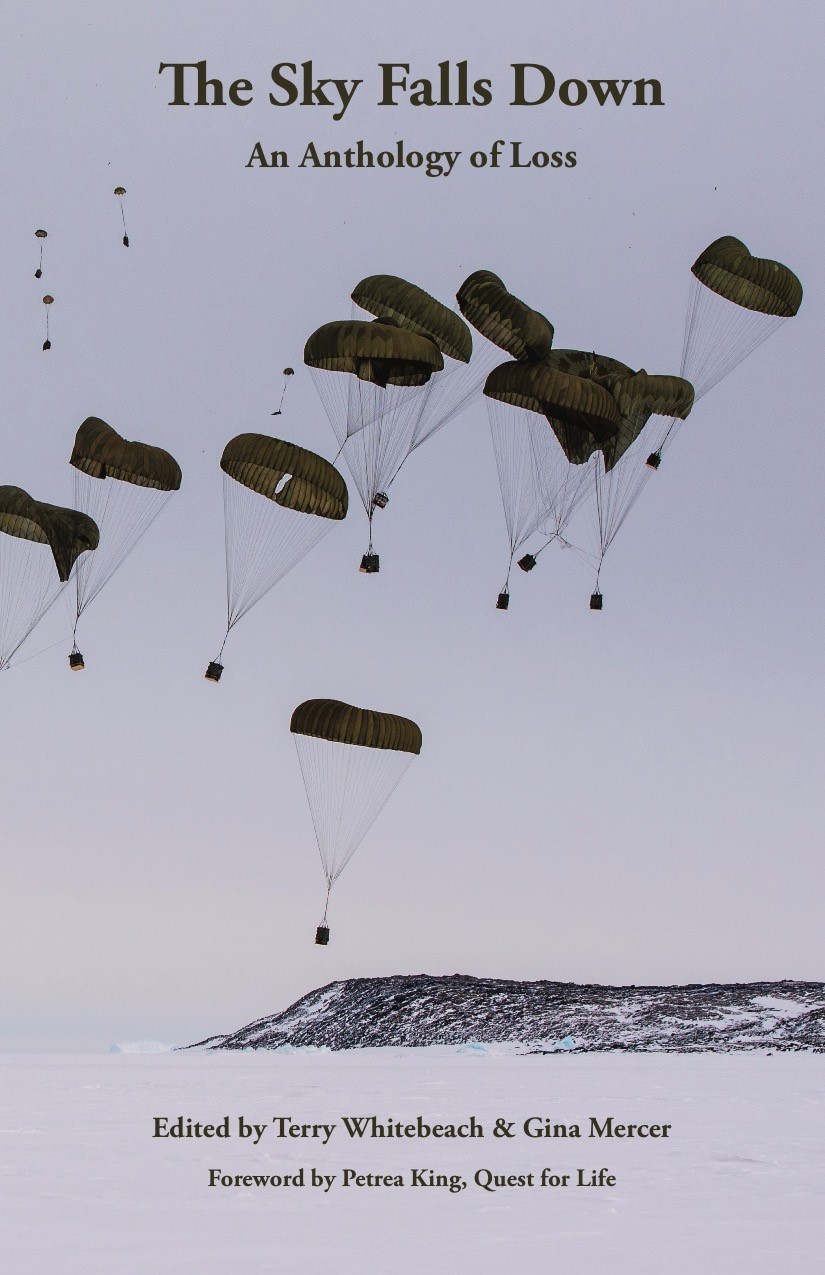 Close and Personal with Terry Whitebeach and Gina Mercer. 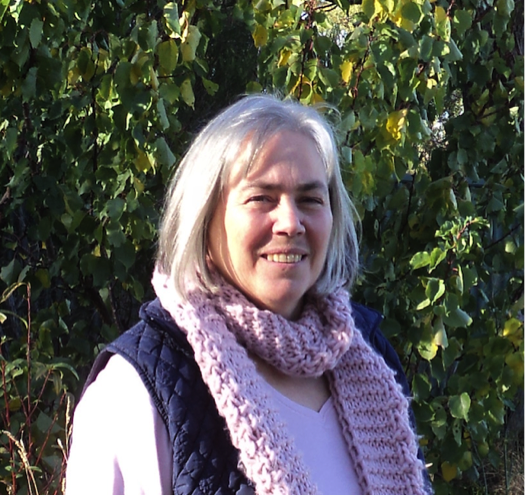 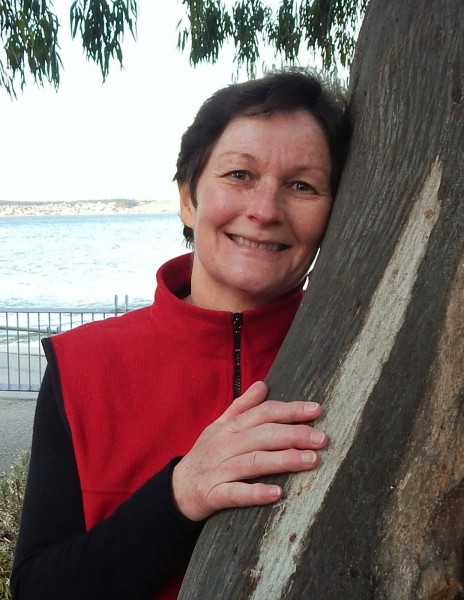 The Sky Falls Down: An Anthology of Loss, is a collection of writing exploring the diverse landscape of loss. Out of the eighty-nine contributors, twenty-two are Tasmanian writers, three are asylum seekers currently detained on Manus Island, and two are refugees recently released from detention. Arianne spoke to editors Terry Whitebeach and Gina Mercer about the process of collecting these important stories, from idea to publication.

“To be human is to know loss in its many forms. Losses tumble into our lives continually; their sources are multiple: personal, ancestral, planetary,” Terry Whitebeach.

This is an anthology that deserves to be celebrated, not only for the diverse and beautiful nature of the stories within, or the exquisite quality of the writing, but for the comfort it can provide to readers. As Terry wisely states, “wounded by loss, we may need to be cared for, but these writers also care for others by sharing their loss and the expression of it – both the wound and the gift. The rawness and randomness of loss transformed into art.”

It was a privilege to speak to Terry and Gina about this book’s journey from idea to publication. Terry says the idea for the collection came to her because she was experiencing “a decade of losses, in many different forms.” Terry tells me the conversations with her peers were increasingly on the subject of loss. “…we were attending far more funerals than we were weddings or christenings … and we were getting letters, emails and phone calls asking us about funeral insurance… loss was a topic very much on my mind.” Terry wondered about the value of collecting an anthology of writing that people could benefit from in times of loss. “I think the value of the book is that people bear witness to the loss. That tells the reader, ‘you’re not alone, we’re all in this together.’” It is a precious thing to make something beautiful out of loss and offer it to someone else. In doing so one is both caring for themselves, and for others, she tells me.

Terry attended a lunch, and was seated next to Gina. She asked Gina if she would be interested in collaborating on the project, and Gina agreed.

Loss “can be such an everyday experience. It can be so complex,” Gina tells me. She describes her young adult years as “a decade of navigating bleak and messy seas. [I] struggled to develop any sense of who I might be, where home might be… What I love most about this anthology is the way each of the contributors gifts their hard-won and life-affirming knowledge to that bewildered teenager.”

I was interested in the process of collecting the pieces in this anthology, as well as the editing, both of which are stories in themselves. Terry and Gina tell me the book took five years to complete. They invited Writers Centres to send call outs and informed their own personal connections, and received hundreds of responses from Australia, New Zealand, Canada, England and Manus Island. Terry and Gina spent countless hours reading, re-reading, sifting, adjusting and re-adjusting the ‘yes’ ‘no’ and ‘maybe’ piles until they arrived at a total of ninety-nine pieces (written by eighty-nine authors), that they felt they couldn’t do without.

Talking me through the editing process, Terry says they each read the submissions separately and then came to meetings with lists of the ones they liked. “There were only a couple of pieces on which we had to agree to differ. We read Susie Greenhill’s and virtually burst into tears …We just went, yes!”

Below is an excerpt from the final paragraph of Susie Greenhill’s ‘It will not be enough’, p18.

I will write the world for you, as it is now, as it was when I searched the sand for the surfboard skeletons of cuttlefish, as a child. I will try to weave a web of words around each vanishing species. Etch out in syllables the freckled constellations of a pardalote’s weightless feathers, the silk fins of galaxias, the wildflower tundra, the ice-bears of the frozen north. I will wrap the wings of the Ulysses butterfly and the goshawk in pages of silk, and try to keep them safe for you – but it will not be enough.

Gina and Terry tell me most of the editing involved shuffling the pieces around to see how they fitted together, and deciding which pieces would enhance the writing beside them. For Terry, the most enjoyable part of the editing process was the excitement of finding different takes on life. “To see not only what another person can make, but also the beauty in final product’s composition, was a particular joy,” she says. Gina tells me she loved “reading the pieces writers had sent in from all around the country and seeing the creative ways they’d interpreted the call-out.” There was “… such richness in the topics they covered. Such beauty and strength in the writing. It was like a huge lucky dip.”

Terry’s least favourite experience was having to send rejections. “Some of the choices were really hard to make. Everyone’s grieving for something,” she says.

I asked how Gina and Terry went about contacting the writers currently imprisoned on Manus Island. They tell me it was facilitated by ‘Writing Through Fences,’ a brilliant organisation founded by poet Janet Galbraith, whom Terry describes as a “powerhouse” and a “miracle worker.” Terry adds that ‘Writing Through Fences” has been doing incredible work smuggling stories from PNG into Australia, including Behrouz Boochani’s award winning work, No Friend But The Mountains. “Janet is effective because she is so visibly vulnerable and yet so strong. She’s an angel of the world.”

I was curious about the beautiful image on the front cover. Gina tells me it depicts an airdrop of supplies to the Davis Research Station in Antarctica, Spring 2017. The image, which she describes as“arresting and poignant,” was taken by Barend Becker, a Tasmanian-based photographer and meteorologist. You can check out his website here: https://bazintaz.com.au/.

I wondered what the parachutes were carrying. The most likely answer is that of scientific equipment needed for research at Davis base, but Gina says she sees these parachutes as “bearing all kinds of metaphors connecting to the title of the anthology: The Sky Falls Down. Metaphors of rescue, soft landings and hope when loss arrives and suddenly your landscape looks bleak, when it feels like your sky is falling,” I couldn’t agree more.

The Sky Falls Down is a book spanning multiple genres: poetry, memoir, prose, short-stories. Gina reflects, “… publishers were unsure about how to market it. They also expressed concern that it fitted into the category of ‘literature’ but also ‘self-help’. So where would booksellers shelve it?!?” The hunt for a publishing house that understood the unique nature of the book was a long one. There was much happy dancing when Stephen Mathews of Ginninderra Press accepted it, Gina tells me. “Ginninderra is a small press with a truly admirable ethos of supporting authors and books the mainstream publishing industry don’t want to know about. They are willing to take risks. We are enormously grateful that they saw the potential in this manuscript.”

As Petrea King astutely says in her forward to the anthology: “You’ll find yourself reaching for particular pieces that somehow articulate how you’re feeling, even before you’ve found the words to express it to yourself… May this book become a friend and a warm companion.” As a society, we have internalised the narrative of not burdening others with our troubles – “I’m fine,” is such an automatic response. The Sky Falls Down offers an antidote to this reaction, and is a valuable reminder that it is okay to speak about and share experiences of loss. As Terry states,

TasWriters thanks Terry and Gina for taking the time to answer our questions.

You can read more about the editors by clicking on the links below: