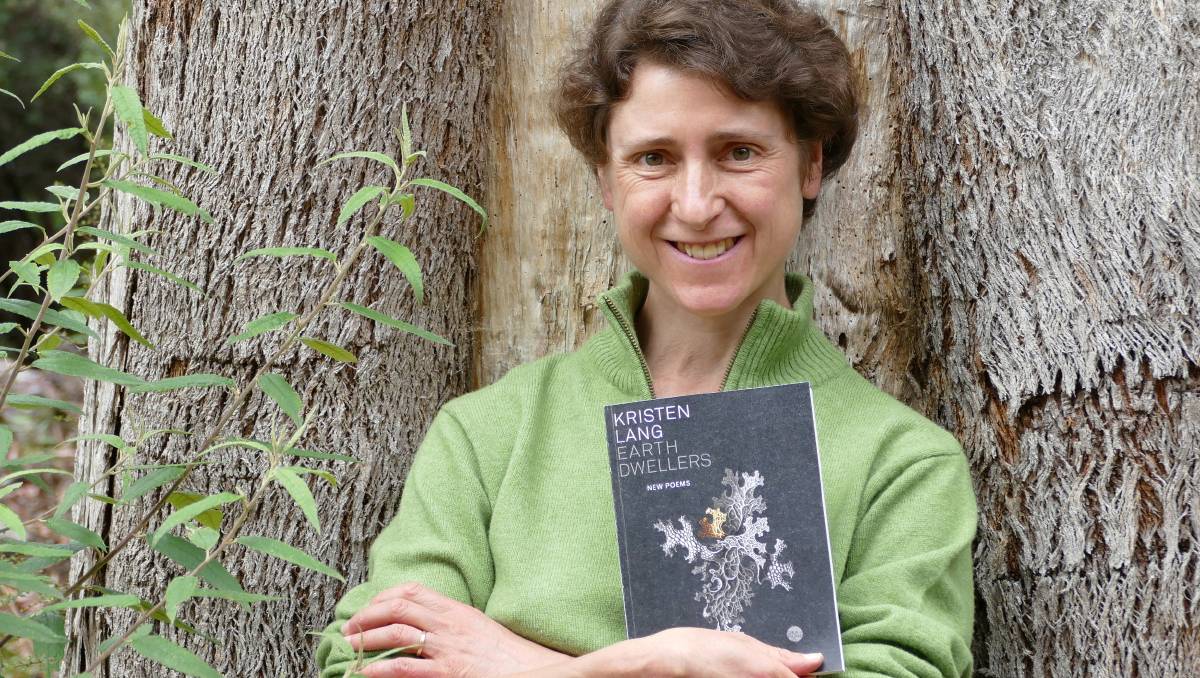 Close and Personal with Kristen Lang 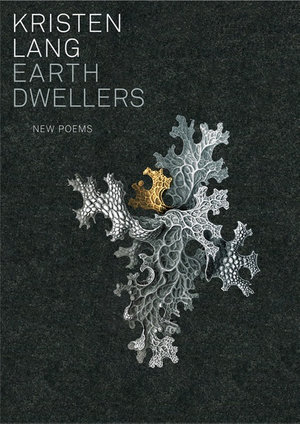 TasWriters recently chatted with Tasmanian poet Kristen Lang about her latest collection, Earth Dwellers, a stunning achievement brimming with intelligence, warmth and clarity. This book is a rare treat not to be missed.

How long have you been working on this collection?

The oldest poem dates back to 2002, with the most recent being written in 2020. I’ve been trying to shape it as a collection for about half that time. As “RockAirWaterSun” it was awarded a place in the 2014 WD Booth Charitable Trust and Island Magazine Mentoring Program, through which I was able to work with the wonderful Sarah Holland-Batt. As “The Unspoken Economy” it was one of six works nationally to be short-listed for the 2019 Dorothy Hewett Award. In 2020, Giramondo expressed an interest and after a few more transformations it became “Earth Dwellers”. It’s been through several mills and feels like a solid slice me!

Do you have a favourite poem?

I’ve read an uncounted number of wonderful poems, but no, I don’t have a favourite. How and why would I choose? I love poetry that can enliven my thinking and my perception, that can knock me out of my assumptions or unfold something in me that I hadn’t known was closed, or teach me something, or fight for something, or immerse me in another’s feelings, or suspend me somewhere beautiful… I remember Dad reading Tennyson to me when I was a child. And I remember being blown away by my first encounter with Jabberwocky – that was pretty wild. Some years later, Wallace Stevens unleashed a similar expansion. But there are so many others.

How would you define eco-poetry, for those unfamiliar with the term?

I probably wouldn’t. I don’t think of it as a necessary term for what I do. If I was speaking to someone who was unfamiliar with what eco-poetry is, I would ask them to read the poetry any way – why box it. For me, the “eco” implies a concern for a more-than-human world, for a lighter footprint, for a recognised connectivity with and responsibility for all the entangled life forms the planet carries. In truth, I don’t want to write “eco-poetry”, I don’t want to be an “eco-poet”. I want to be a writer among a global population of humans that actively values, venerates, cares for the all-life, deep-time context within which we exist. I want to contribute to a shared expression of the indigeneity, if you like, of humans to Earth – that’s more important to me than the relationship between readers and eco-poetry. Ideally, in my dream world, it would be the same thing!

One of my favourite poems in the collection is Alpine Sky. Your writing caught me immediately and refused to let go. It reminded me of hiking Cradle Mountain. Do you remember where you were when you wrote this poem?

I do, yes. But do I want to tell you… It’s not about being secretive, though if there were a risk of causing a stampede to the location, secrecy would be warranted. It’s more about honesty. I do name several locations in the book (Everest, Poon Hill, Mount Duncan, Mount Roland, Blue Mountains, etc). But a good deal of what I feel for the poems in the collection doesn’t, for me at least, require them to be pinned to the locations of their particular imagery. The lake in “Alpine Sky” is on the West Coast of Tassy. The feeling there, as so often when I’m walking, was not of going to location X, but of stepping outside the normal insistence on human-constructed categories. That’s not possible in any complete sense, but the stories we tell and the names we give can be loosened. I’m not sure how this is going to sound, but I like to imagine the top of my skull physically flipping open and all the thoughts and sensations on the inside swirling and merging with all that is on the outside, until there is no inside or outside at all. The feeling is of entering, or rather re-entering, or rather re-recognising that I have always already entered, the interconnected world, the ecosphere, the biome, the living planet. The mountain I’m climbing is all mountains, all lakes, all weather, not because I’m everywhere, but because the regard has to extend that far. There’s no boundary. The poems aren’t often about single locations so much as they are about feeling the presence of the biome. The aliveness of that.

Can you tell me how you write your poems? How you edit them? Have you developed a particular formula or does it change each time?

Each poem has a life of its own. I’ve learnt to let that happen. But I’ve also always made myself available for it to happen. This hasn’t been the product of discipline so much as of a random mix of circumstance and personality traits. I am at the keyboard. Stuff happens. More stuff happens in my head than on the page and when the heat of the moment has passed and what isn’t present in the words becomes (often painfully) apparent, other stuff (called editing) happens. That’s about the sum of it. Often the stuff has to do with feelings I don’t yet understand or want to linger in or dig deeper into or find persuasion for. Sometimes the stuff is what lets me breathe. Sometimes I struggle to breathe because of it. I write free verse… which is never free. One of the more consistent delights in writing for me is the process of listening for and coaxing into being all the sound patterns, all the little rhythms and flow lines, the music that might help to bring life to a poem.

When did you decide that poetry was something you wanted to pursue?

My early interests lay with maths, science and music. If I could snap my fingers now and suddenly emerge in the midst of a flourishing career, I’d hope to be a mycologist or an entomologist or an ornithologist, perhaps a restorative ecologist – something really useful! Unfortunately, I really enjoyed the literature units I took at university – they offered the free-ranging, probing, philosophically dense, unfettered kinds of research and exchange I had thought uni was meant to be about. When I discovered poetry was not just an excuse for a diary entry but, rather, a 3D world full of dead and living poets that I could run around in, that I could even plant a bit of green in, I started trying to live there. It isn’t possible to do so, but it is possible to do a PhD in poetry and this allowed the illusion of living in the world of poetry to linger long enough for me to become highly unemployable. I wanted to pursue poetry because it felt like a liberation into a world I could be part of. The rest of the world carried on without me – sometimes I miss it.

A mountain rises on the other side of my room’s southern wall. I can’t see it from my desk – if I could, the climbing / writing ratio would probably tilt a little more towards the climbing. I can feel the mountain’s presence, so climbing is always on the cards. I stand when I write. The shelf to my left holds pieces of stone and bark and shell, books, paper clips… A peg hangs from an overhead lamp on which I hang images or poems that have recently moved me. At the moment, it holds a print-out of my partner’s (healthy) heartbeat. On my right, one of our many dog mats is positioned to catch the afternoon sun. There’s also a me-high pot plant and a few boxes containing copies of poetry books – for sale, by the way… the details are on my website.

Do you have a favourite Tasmanian, or Australian wilderness landscape?

No. I’m not very good at favourites. I like to feel physically involved in the landscapes I’m in, to be there long enough for the threads of it to soak in a little, to catch at my bones, but I don’t mind whether I’m with rivers or forests, mountains or deserts, shorelines or grasslands, micro or macro… star surfing would be fine.

What is the most important piece of advice you would pass on to an aspiring poet?

Find your own honesty. Connect it to the larger world.

Tell me about some of the poets who have most inspired you over your career.

Wallace Stevens for the insolid billowing of the solid and the palm at the end of the mind. Tomas Tranströmer for midnight and musical hauntings. Galway Kinnell for turning the soil of the heart. Jill Jones for Broken / Open. James Wright for the horses. Tennyson. Shelley. Alison Thompson for the man who became a tree. MTC Cronin for the flowers. Billy Collins for velocity. Bronwyn Lea for the only good villanelle. Mark Tredinnick for surviving dying. Ross Gay. Sherman Alexie. Patricia Smith. Wendell Berry… And so many more!

Do you hold out hope for the future of our planet?

The planet has a future – 4 or 5 billion years, isn’t it, before the sun swallows the Earth? I don’t imagine humans will be part of all or even most of it. But what I guess you’re asking is do I hold out much hope for the chance that humans will, in the majority, come to hold the ecosphere with sufficient will and regard to halt current habitat and species loss, to halt climate change, to prevent a water crisis, to halt plastic pollution, to halt air pollution… let alone to reverse these things, to restore, to achieve circularity, to be sustainable… No, I don’t. Ecological restoration is a growing field. There’s a swell of support for a more ethical, less arrogant way of being in the world. The chance that this support will widen and so become the culture of hundreds of thousands of people, and then the culture of millions, and then billions, that the economy will cease to be based on growth, that humans will accept limits for the sake of the wellbeing of other species, that equity and justice among humans will facilitate a global effort to sustain a vibrant, diverse planet… this chance is tiny. But imagine if it happened!

Do you believe poetry can help people understand and re-connect with the earth?

Yes. Maybe the universal basic income should be delivered with an eco-poem. Propaganda for the planet.