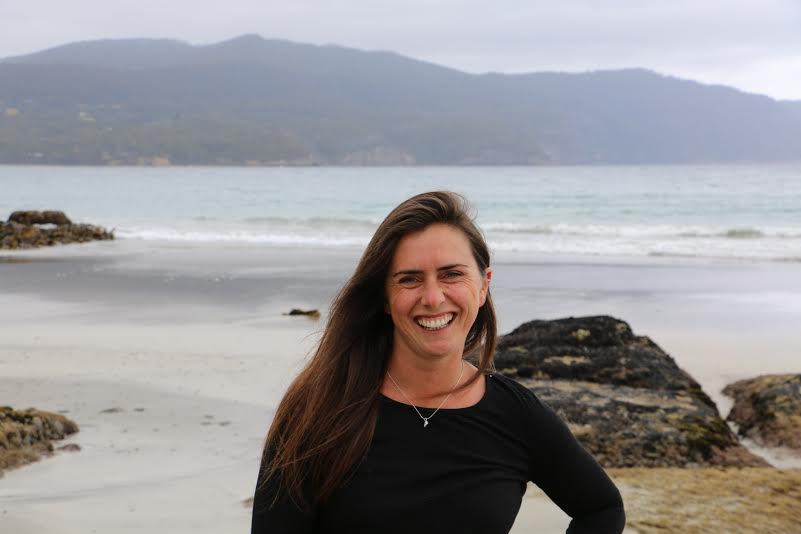 Close and Personal with Erin Hortle

Congratulations to Tasmania’s own Erin Hortle on the publication of her debut novel, The Octopus and I, which was released by Allen and Unwin yesterday. Read on for a fascinating insight into the inspiration behind the book.

Where did the idea for this novel come from?

I was inspired to write what became The Octopus and I  when I heard about the octopuses that live at Eaglehawk Neck (which for anyone not familiar with the area is an isthmus that connects the Tasman Peninsula to mainland Tasmania). I was utterly astonished and fascinated to learn that on nights when there is a large swell on the ocean side of the neck, female, egg-carrying octopuses emerge out of the calm waters of Eaglehawk Bay and crawl across the isthmus, which has a highway running across it, evidently desperate to reach the oceanic waters of Pirates Bay. The theory is that the peninsula was once an island, separated from the rest of Tasmania by a narrow channel and the octopuses, who lived in the sheltered Fredrick Henry and Norfolk bays, would use this channel to access the vast chains of sea-caves in and around Pirates Bay – a perfect habitat for them to extrude their many thousands of eggs. Today, the descendants of those octopuses still try to make it to the caves via this route, but become trapped in Eaglehawk Bay. The sound and vibrations of the swell, crashing onto the shore or sandbanks of Pirates Bay, less than one hundred metres away, tempts them to make the desperate journey for their eggs. Many don’t make it. There’s so much in this anecdote I found fascinating, not the least its narrative potential: on a genre level, it’s both a journey narrative and a tragedy. And the potential imagery it evokes: octopus road-kill; pregnant bodies turned to a squelch of black ink, blue blood and brains on the bitumen road. I just couldn’t leave the idea alone and it was from there that the novel emerged.

This narratives begins with the octopuses, just as my whole rationale for writing began with the octopuses. The human story-line built itself around them (in part, I think, because when I started writing it I felt a human narrative angle to be necessary for a prolonged work of fiction) and this is mirrored in the narrative structure of the novel, which begins with an octopuses perspective, then switches to a human’s – but the human narrative is crosshatched throughout with stories from the perspectives of animals whose lives intersect with the human story. As important as I think this human narrative is (and as much as I enjoyed writing it, and delving into the characters, their psyches, their relationships with themselves, with one another and with the Tasmanian coast) the octopuses were the starting point and the octopuses and other nonhuman residents of the region were the end point of the novel for me – you’ll have to read it to see how this is expressed in the dénouement.

What do you hope readers will take away?

There are two types of reader responses that I hope The Octopus and I provokes. Firstly, I suppose, is a reaction to the aesthetics of the novel. I would love for this story to prompt readers to see the Tasmanian coast and its inhabitants in a new light, via the poetics of language, and of the sections of more experimental writing, which invites readers to experience this coast via Other consciousnesses, but also through the lens of the human characters. So much of what I love about the Tasmanian coast and Tasmanian weather has seeped into this story; writing has allowed me to delve into and come to understand the almost overwhelming sense of awe and poignancy I feel when I’m in or on the water, and I hope that I’ve somehow been able to share this.

This aesthetics also has a political and ethical function, though, which feeds into my second desired reader response. Literature and art have the capacity to draw readers (and viewers) in, to the point that they become simultaneously intellectually and emotionally entangled in the work – this, I believe, is the power of the arts (and is something that is woefully undervalued in our society, perhaps because in this age of data, it is a reaction which is irreducible in its very nature). I hope, that by reading, people will become emotionally entangled with the lives of all of the creatures – both human and nonhuman – whose lives are represented in this story, and that by doing so, they will struggle to figure out how to respond to the events of the narrative on an ethical level. Without giving too much away, there is a moment towards the end of the narrative when the human protagonist, Lucy, draws a line in the sand, or so to speak, and says, “But isn’t it black and white, this time?” Her proclamation is undermined by the presence of the animal narratives that intersect the human narrative, as these animal stories are designed to prompt the reader to question Lucy’s judgement, and wonder if it is, actually, black and white – if ethics can ever be black and white when we think through a place, and the human’s position in it, in all of its complexities.

This novel doesn’t seek to provide answers, necessarily, but rather, it seeks to prompt readers to question which lives they value and why. When we start to really think about it, we realise how troubling a question this really is, because all lives come at the expense of other lives in one way or another; the world cannot sustain all life, even as, in this biopolitical age, our social mechanisms are geared (at least on the surface) to preserving, and so valuing, human life at the cost of all else. I guess the take-away I would like my readers to have is to start asking those questions – about which lives we value over others and how and why. In this current milieu – a milieu overwhelmed by pandemic – I do think these are question worth thinking through, although I think these questions have never been more troubling and uncomfortable to us humans than they are now. It’s all so morally fraught.

What is your favourite fact about Octopi?

I have so many – some that emphasise their strangeness, and others that are just funny and, well… cute, Like the fact that an octopus spends roughly 3% of its day doing housework, or that octopuses in captivity often show favouritism when it comes to researchers, consistently smooching up to one human while avoiding or squirting water at another, which researchers suggest indicates something about the distinctiveness of octopus personalities (although scientists appear to be hesitant to delve too far into this as this sort of thinking becomes speculative, which goes against the mores of the discipline). Something that I found incredibly fascinating, and which informed my approach to writing an octopus’s perspective, was the fact that their skin is covered with phototransduction cells which process light in a similar way an octopus’s eye (and human’s eye for that matter) does, which means they can see with their skin, or do something very similar to what we regard as seeing. I’m going to stop here or else I never will, as there are just so, so, so many interesting things about octopuses – and there are plenty that are shown, in one way or another, in the novel.

Can you tell me about the publication process? Did you send your manuscript unsolicited to the dreaded slush pile, or seek out an agent?

I was incredibly lucky in the way publication came about. I wrote a part of this novel as a part of a PhD thesis, and when my PhD was coming to an end I asked one of my supervisor’s, Danielle Wood, if she had any tips on how to navigate the industry. She had a meeting with her agent, Gaby Naher, the next day and said she’d ask Gaby for any insights on my behalf. In this conversation, she described The Octopus and I  to Gaby, and Gaby, who is an ocean-lover, asked to see it. I signed with Gaby a couple of weeks later, and after a few rounds of edits, she represented me to publishers. I’m so fortunate to have ended up with Jane Palfreyman at Allen and Unwin as my publisher; Jane understood precisely what I was trying to do with this novel and has helped me to realise this with thoughtful edits, and now the story has turned into a beautiful object that is the book, with a gorgeous cover designed by Alissa Dinallo and a Hokusai print – “The Dream of the Fisherman’s Wife” – as the inner cover.

What was the best part of the writing process for this book, and what was the most difficult?

The best parts were the times when words flowed, when it felt like I couldn’t get them out of me fast enough and I became angry at my hands because they couldn’t type fast enough. I distinctly remember a time when I was running along the beach at The Neck on Bruny (where I was living whilst I wrote this novel) and I felt, almost viscerally, like I was in the ocean, submerged to just above my nose and I was wearing goggles, watching as the surface lapped halfway across my vision; the words were the water and I needed to drain them onto a page. I don’t think I’ve ever run so fast back to the car, so I could dash home and get them out of me.

The hardest parts were the slog, the labour of writing even when you’re not inspired. A novel will never get written if writers only write when they are inspired. It was also tricky figuring out how to structure it all – that final stage of pulling things together when you’re holding the novel as a whole in your mind whilst making minute changes is exhausting.

What do you think is the most important ingredient in a story?

Plausible characterisation and narrative tension. There are so many other things that make stories spectacular, but if you’re missing either one of these things your story isn’t going to work.

What do you do when you’re not writing?

I read and I surf, and I spend time out in the boat – these things, in my leisure time. But since finishing The Octopus and I I’ve begun working as a teacher, and work takes up more of my writing time than I’d currently like it to. I do love the vibrancy of teaching and the interactions with students, however I’d like my professional life to be more evenly balanced between writing and teaching, which is something I hope to achieve in the future.

Do you have plans for future books?

Yes. I’m probably two thirds of the way through drafting my next novel.

Who are some of your favourite writers?

Do you have any advice for aspiring writers?

TasWriters thanks Erin for taking the time to chat with us. We eagerly await your future novels!