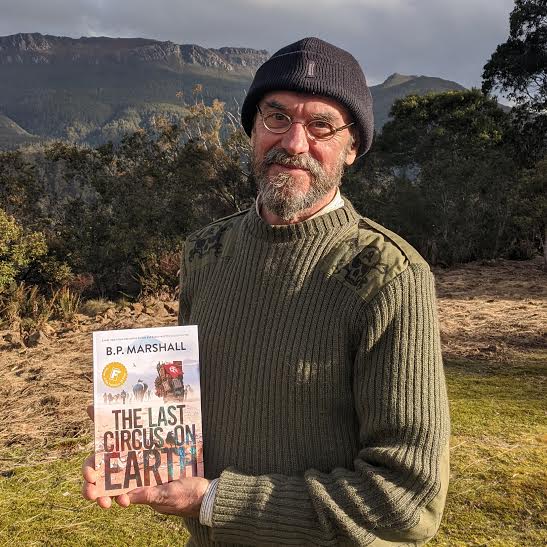 Close and Personal with B.P. Marshall

Ben Marshall is the author of The Last Circus on Earth, a thrilling near future novel taking reader’s on a journey across Europe and Russia with a hellish Circus. It won the 2019 Fantasica Science Fiction Prize. Read on to find out more about Ben’s writing process and inspiration for his novel, and the play he is currently co-developing as part of TasWriters “Freedom and Liberty in a Time of Pandemic” project.

“TasWriters have sourced funds for a scripted work to be read-through and filmed on November 15th, the International Day of the Imprisoned Writer. The theme was “Freedom and Liberty in a Time of Pandemic”.  A competition was announced for three Tasmanian writers to collaborate, and myself, playwright Stephanie Briarwood, and journalist Louise Bowers joined forces to create a one hour drama. Louise Bowers was sadly obliged to bow out due to health reasons, but Steph and I are at the scripting stage of the work now.
The narrative is set in 2025, where pandemic is the new normal, and follows a critical day in the life of Wendy Chen, an ex-Hong Kong journalist forced to flee Hong Kong, and now living in Burnie.  Unable to practice her trade, Wendy drives (and lives in) an illegal taxi.  Unable to contact her family in Hong Kong without risking their safety, Wendy feels terribly alone.  She arranges to have an illegal but private contact with her mother for her birthday, but her day’s passengers keep getting in her way.  Each passenger is a mystery, each is a problem Wendy feels obliged to solve, and, in the end, they bring her new hope, connection and happiness.” Ben Marshall. 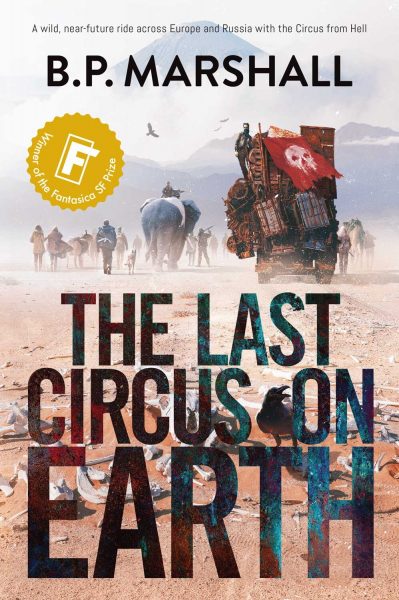 Where did the idea for this book come from? Ben says The Last Circus on Earth came from another book he wrote, The Pyrate’s Sonne, as yet unpublished. Ben says this book “follows the journey of a fallen noble – fourteen year old Red, who is reluctantly obliged to become captain, in lieu of anyone more suitable, when his pirate father is murdered.  Red loathes piracy, and loves books, especially the exciting new tomes emerging from pre-Enlightenment England which turn the world on its head.  The ‘natural sciences’ thrill him, just as loot and drink thrill his crew.  Negotiating his way home is the ultimate adventure, not least because Red refuses to hurt anyone or steal anything.  Worse, he uses ‘science’, and his naturally curious and kind disposition, to get his crew in, and then out, of trouble.  Their return to London is fraught, and their encounter with Charles II and members of the Royal Society leads to a denouement that transforms pirates into scientist-explorers.

By writing about this era, I could explore the ideas that underpin the fundamental change of large-scale human cultures from feudal to democratic.  The idea that humans are culturally evolving in some kind of inexorable process is one that many have traditionally held, but I doubted it.  As a result, after seeing how we began to evolve out of feudalism, I wanted to see if our current trajectory in 2020 led to human cultural extinction, or a return to a feudal default, or something better. And so I came to write The Last Circus on Earth.”

I asked Ben what the most challenging part of writing this book was. “Research,” he says. “Historical and speculative fiction require the biggest workload for any author. You have to be very organised. The events in the book have to feel plausible and authentic. When you’re writing books set in the future, you have to extrapolate trends, which you can only do through research.” Understanding what your book is actually about is key, Ben says, going on to tell me that asking the right questions is very important. “You slowly work out what questions you’re asking, which helps guide much of your story’s direction.” Some of the questions guiding Ben’s novel were, how do civilisations progress? Is there way to save the species from long term extinction? What is it in the human species that has brought us to this point? What obstacles do we need to overcome?

I wondered whether Ben always wanted to be a writer. “I always read and I always wrote. I’ve always been good at English. So yes,” he says.

Can you do any circus tricks? “I’m good at reading subtext. In the Last Circus I tried to avoid too many ‘sci-fi’ McGuffins – tech that was implausibly advanced – and instead I tracked current legitimate scientific, cultural and political trends to provide the backdrop to the story, set in 2070.  But, when I included a “Russian witch”, Baba Yaga, as part of my crew of carnies and freaks, her special skills of mind-reading and prediction needed to be plausible to the people of the time, and explainable to readers of today.  ‘Cold reading’ is a skill that anyone can develop, and allows one person to convince another that they can tell the future and read minds.  I allowed readers to follow Baba Yaga’s ‘reading’ for a tough but emotionally vulnerable babushka, and see how Baba achieved her goals with a series of simple, stock phrases and questions, gestures and mannerisms, and, ultimately, a caring heart.”

I was curious about Ben’s writing routine. Ben is a full time scriptwriter, “so book writing happens between scriptwriting,” he says.”I work an ordinary nine till five or six day. I drink coffee, take breaks, and walk the dog in between.”

I asked Ben what got him into scriptwriting. “It was a complete accident,” he says. “I used to work as a remote area nurse, and I was visited by a friend who was setting up a medical drama in New Zealand, and he asked me if I could pass on some of the stories and experiences that had come out of my nursing career. I then went back to Darwin, and he later sent me a message asking whether I wanted a job on the story-lining table.”

I’m always interested to discover which authors have made an impression on a writer’s life. “There are too many to count,” Ben says. “Lewis Carroll was an early influence. I also love Russian folktales. My father brought me back a collection after coming back from Russia. Those stories and that style of storytelling have stayed with me all my life.” One of his most recent reads, Ben says, is Pat Barker’s Regeneration trilogy. “It sounds very dull when you read about it, but the writing and the story- telling is breathtaking. If I could write half as well as her I’d be happy.” Ben says he also likes Murakami, particularly 1Q84, and reads quite a few scientific books.

I asked Ben to share any advice that has helped him as a writer. “If you’re stalled with a problem, walking away and letting the unconscious mind ruminate on the issue can be helpful,” he says. Asking yourself, ‘what is the main problem I’m experiencing?’ can also help, he tells me. “The obstacle can sometimes be the solution.” Ben gives an example of his characters getting themselves into an impossibly tricky situation. “I wasn’t sure how to get them out of it, but after a while I realised the solution lay within the specific skillsets that made them unique as characters.” Ben says that sometimes it can be useful to welcome problems in writing. “It’s okay for characters to get into these un-resolvable situations. It’s good fun to work out how to get them out.”

TasWriters thanks Ben for taking the time to chat with us. We wish him all the best with his future novel and scriptwriting projects!