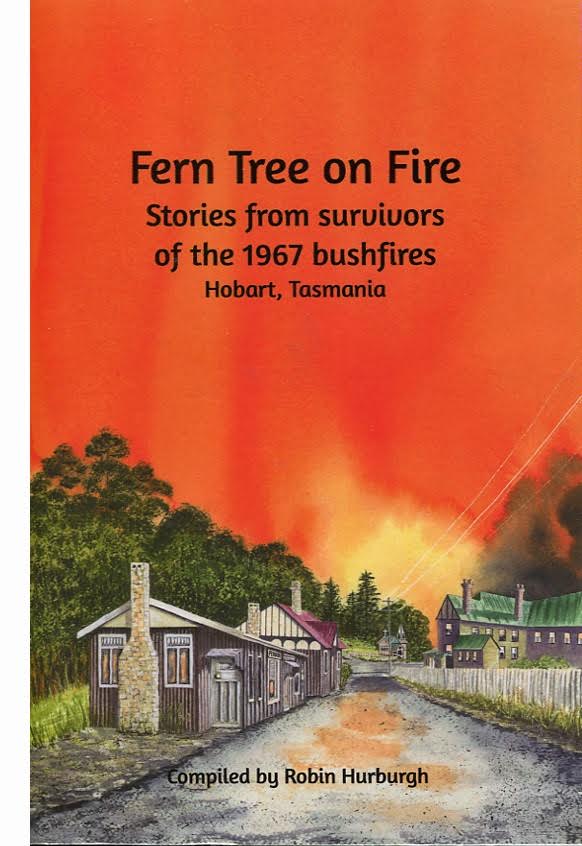 Review of ‘Fern Tree on Fire: Stories from Survivors of the 1967 Bushfires, Hobart’

Here’s a lively and poignant collection of stories put together by Fern Tree residents who experienced up close and personal the fire that swept through the hills surrounding kunanyi/Mt Wellington, and survived the terror to share their tales with us. Not just panicked moments when Fern Tree was ravaged by hungry flames, but also how life was before that unforgettable “Black Tuesday” on 7 February 1967. Childhood tales invoke idyllic impressions of what it was like to grow up on the mountain in the 1950s and 1960s, running carefree (like native hens) around historical buildings such as the Fern Tree Hotel (burnt down and rebuilt as Fern Tree Tavern), Streets’ Shop (razed), St Raphael’s Church (still intact), The Springs Hotel (only mossy walls remain), and more.

Chris Wilson writes about her walks around The Springs Hotel as a child, making snowballs at Pillinger Drive in 1962, and discovering “a stash of Playboy magazines at the bottom of Radford’s Track. The Playboy bunnies seemed the height of strangeness, indecency and wickedness.”  Such cheeky moments are narrated by the now “grey-haired individuals” responsible for the book’s creation, who chuckle from recollection and over a pint at the tavern—yes, a few survivors still live up that way, from South Hobart, Ridgeway, Chimney Pot Hill, along the winding Huon Road down to Longley.

“A large number of Summerleas Road residents lost their homes,” writes Irene Schaffer. “Out of 64 homes, only 20 remained. The fire had raced up and down and across the mile-long road, taking a house here, leaving four on the other side, only to race back and take another four further up the road.” Indeed, on that day and in a matter of five hours, 110 separate fires raged in several parts of southern Tasmania that left 62 people dead, 80 bridges destroyed, 900 injured, 1,293 houses burnt and over 7,000 homeless.

This 329-page book is special. I write this review, half a century later, from Schaffer’s red brick house with a green roof, still standing strong thanks to neighbour Alex Sklenica, who threw homemade beer on the burning roof after discovering the taps were dry! The 112 photographs and 6 maps (before and after fire’s impact on Fern Tree and Ridgeway) complement 73 stories filled with anecdotes, many of which might draw chuckles or tears.

The book will be delivered upon order made via email to ferntreeonfire55@gmail.com. It is $35 for pick up (why not at the tavern to reflect on the past?) or add $10 postage for delivery.