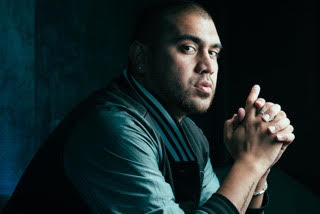 Blurring the lines with Omar Musa

It’s no exaggeration to say Omar Musa is one of the coolest poets of his generation.

The Malaysian-Australian artist blurs the lines between rap and poetry, having written two books and released three hip-hop albums.

This month he returns to Tasmania, tutoring Year 9 students at The Friends School before he performs in the Founders Room on June 21 (tickets here). He chats about his art ahead of the gig.

You’re a rapper and a performance poet. But tell us, what’s the difference between the two artforms?

When did you realise you were talented at using poetry to express yourself?

When I was in about Year 5. My father had always told me that poetry was a good thing, that it was something he had made a name for himself with in Malaysia. But I had a teacher named Ms. Pattison who set us writing exercises in primary school and it was then that I realised how fun poetry actually was. At first, I would write really gory horror stories, but then I wrote a suite of poems about Egyptian mythology and thought: ‘I’m pretty good at this’. We were only supposed to write three poems but I wrote five. I never looked back. It felt liberating.

What are the main themes that you choose to rap about – whether politics, social, or personal issues – and why?

What do you think makes a really strong piece of poetry?

What can we expect from your upcoming gig?

I always, ALWAYS love coming to Tassie. Can’t wait to see you all again.

Omar Musa will perform in the Founders Room, Salamanca Arts Centre, at 8pm on June 21. Guest artists include Linda Brinckman, Young Dawkins and Nick Haywood. Tickets $10 members, $15 non-member, here or at the door.