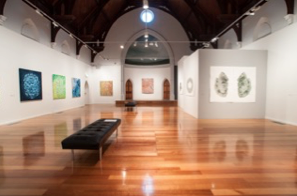 Bigger on the Inside by Kate Elphinstone, Devonport Young Writer

The Tasmanian Writers Centre has selected five emerging writers aged 16-30 as residents in the inaugural Devonport Young Writers in the City program. Kate Elphinstone spent her residency at the Devonport Regional Gallery, and has crafted the following experimental essay based on her experiences.

Bigger on the Inside

I’m writing in a church that has changed its insides.

You wouldn’t know, entering from the outside unless you read the sign that says ‘Devonport Regional Gallery’. I like it in here, though I know not everyone would because there are opposites of everything.

You can’t forget the gallery was a church because its memory is everywhere: in the high ceiling, the archways of doors, and the glossy wooden floor. The artwork hangs on its white walls. I’m sitting in a rolling chair at a desk on what was the altar, a place of the privileged few, and this lets me look down over everything new.

First I think I like sitting here writing in the gallery because of the peace and silence caused by the absence of others. Silence, to me, is always a comfort. I get nervous every time I hear the entrance door open and think I’ve never really liked to share. Not in this day and age where Facebook stores all our memories away, and Instagram imparts the record of our past. Then when people arrive, I realise how much it aches when you’re alone.

I often forget to miss things when they aren’t right in front of me.

I look at the hanging works made by all sorts of people, who decided that creating is better than not creating, and an audience is fine, too, if you can get it. But mostly it’s about doing something in this life to help make a mark of understanding in a world that makes no sense. These artists tell their points of view to whoever is willing to look. Some of the artists comment on our country’s history, which is good, we shouldn’t forget it, because we all know we’ll repeat it without reminders.

The gallery sits between a laneway and a video store, full of big ideas in this small city. Inside its walls you are vulnerable, even more so when you’re alone because the art around you is placing a mirror to everything at risk to the tides, agony caused at sea, in our oceans and our place as people of an island country. Each artwork hints at big and scary ideas: the end of humanity, questioning mortality, tidal waves and thoughts of torture. Some pieces tell the story of our politicians banning refugees from our borders, saying: ‘don’t come to the land of the lucky and the free’.

‘Hold the mirror up, what do you see?’ say the righteous artists, asking we do better.

I don’t know much about art in that I’ve never studied it, only what it makes me think or feel (or not) when I see it. I had a conversation with a friend some weeks ago about why art can’t be explained. All ownership is given to the viewer, leaving them to interpret from their life experiences, and that’s why the artist can’t explain, shouldn’t explain, what they’ve done.

My friend wanted an explanation. Apparently young people are more open to authoritarian rule. I read that the other week somewhere reputable, maybe The Guardian online. I realised more often than not I want to be told what to do because I’m scared of the thoughts I think, the decisions I make. I want to blame someone else for my mistakes. So I understood why she wanted an explanation. You want to know the right things, be correct when you’re speaking. But then again, Trump is president.

Is it safe to assume the world is now ending?

I take my time to stare at the artist’s works and think of the hours they took, the thought put into choosing the materials and painstakingly placing them in precise positions. Speaking to what no one else noticed, trying to tell us, ‘this here is important’.

I think we need people taking the time to show others, others who just churn through their lives. Out of the twenty-two artists’ works, I look longest at the two pieces focusing on refugees. I think of people stuck on islands, in muggy heat with bad water, wondering the risk to their daughters, seeing endless days in sight and wondering ‘is it worth all their might?’. Time is never there when you want it to be and won’t leave when you’re begging for reprieve. The never-ending boredom of being stuck in a place where you can do nothing, be nothing, told: ‘you are nothing’.

I shake because it’s been over a decade now and even when the community stands up and says, ‘no, enough’, the right people aren’t listening.

They mustn’t spend time in galleries to realise our lives are about more than a budget that needs balancing.

I don’t know real boredom. Crushing, mind-numbing, insufferable, infinite time, stretched seconds of days that make it feel like it will never, ever end. I can leave here, free. Go home and see my mother and father whose only worry for their daughter is that she isn’t happy.

Here, I am happy. I’m allowed to sit and write, and if I’m honest, it’s one of my favourite places in this small city by the water because I feel I could be anywhere. I know what is there on the outside but after a while I forget it exists. I’m here in an inner world, within bricks and mortar. Away from the pub down the street where people are looking to slaughter their histories with too much drink. I could be anyone when I’m in here. It’s when I go outside again I’m faced with my reality.

It’s exposing to be sitting here in the gallery, so I pretend to be busy writing even if I’m not. People walk past, and some say hello lightly, open their mouths slightly. I wonder where they come from and look at them while trying not to look at them but after a time the novelty is gone, and I don’t even look up.

There is a lot I don’t see in my everyday, but here I have the time to notice. Sitting in the gallery on my third day I notice there’s a crack in the wall, maybe half a metre tall. I realise some of the walls are grey, not white. I note just how long a minute takes. Sometimes it takes five minutes. Sometimes five seconds. Sometimes time stops. Every little sound is magnified. I’m afraid I’ll make too much noise with my movements, so I try to do everything with care.

In the silence, I have nothing but my thoughts and it turns out I don’t have many that tell me a story. I think of snippets of memories or words, but there is no running commentary in my brain that is helping me out with writing this, not one bit.

I look again at the artists’ work and feel wonder that I live in a country with freedom of expression. To even be here surrounded by works created by people who had an idea to make and finished it. I rarely finish anything. I can’t, I get distracted with more ideas, observations and memories. Like from the other day when my partner tried joking that if I fall pregnant, it will be with twins. It’s not a joke I find funny because I’m still young, I don’t yet want kids.

‘It’s in the family,’ he said, and his sister didn’t have twins, so it must be him.

‘It’s a scary world to bring kids into,’ I say. ‘I’ll break with the weight of two humans.’

I just nod while thinking of the stories I’ve heard of tearing and hips displacing and traumatic pain that somehow love helps you forget.

A few hours into to my second day in the gallery I notice the security cameras. I wonder if anyone is watching me. Should I wave? Are they even connected? I suppose they have to be. There must be a lot of money on these walls.

When I’m inside the gallery, I wonder perhaps everything is ending, and I wouldn’t know sitting inside this constructed world. There’s no bugs or spiders, no dust or dirt, no sunlight. There are bright bulbs of electricity, shining because they are told to.

I’ve forgotten how to think in silence when there’s every opportunity now to be distracted away from it. Time stretches. My head itches, face itches, neck itches, arm itches. I panic, try to direct my thoughts. I start thinking of water, the tides, the give and take of the ocean. I’m reminded of an Instagram feed of a Russian fisherman sharing photos of his catches from the deep. I told that story at a Christmas party. I thought it was interesting, but I’m not sure I said it in an interesting way. I’m not good at telling stories. I didn’t say how they looked with their translucent scales, hideous, monstrous eyes and sharp teeth in wide mouths. ‘They look like, like, well, ALIENS!’ I’d say with big eyes and hands outstretched. People just nodded. ‘Yeah, unreal,’ they said, waiting for me to ask another question they can answer about their lives.

I’m beginning to get used to the silence of the gallery when it’s broken by people entering, bringing their noise. I realise how it warms me. What is worse I find, after being here for a time, is the people who enter alone and continue the silence. They don’t know the warmth or bring any with them. Or mothers that shush their rampant children. I know it’s polite and it’s what we’re told is right, but I want to say, ‘let them run! Don’t stop them’.

Almost every adult acts the same but differently: the quiet shifting, hands behind backs, hands in pockets, hands crossed or stroking their chins, looking at a loss. There are long leather backless seats where people sit, not always, but they can if they want to. And just when I think this is all it will ever be, a woman walks right up and speaks to me.

Her hair is long and curly, she held a bag from Target, and I didn’t know her, but that didn’t stop her saying, ‘does it feel like you should be watching a class full of people doing an exam? Where’s the ruler, heh? Snap, snap, snap!’.

I laugh over the lid of my laptop, look down at the wood grain of my desk.

‘I’d never thought of that.’

‘I like the one with the scribbles. The black bits with the pins. You can see animals in them.’

She looks over to her partner, turns back with a knowing grin.

Points to a painting.

‘I don’t like this one. I didn’t like the rubbish in the bottom corner. Didn’t like what it was saying. It reminds me of the Caribbean, though. I was there once, met a big Rastafarian.’

‘He took down his hair and told me he wanted to wrap me in it.’

‘It didn’t happen. But he did get me stoned.’

And then she walked away, quick wave, smiling.

You can attend readings from our residents at the Tidal Festival from 5.30-7pm, January 23.