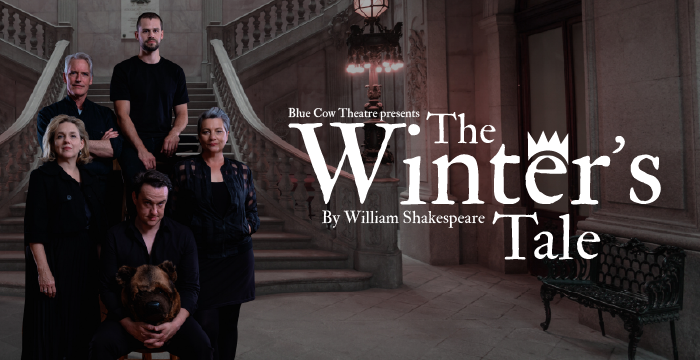 Covid shut down the theatres and sacked the actors and technicians. The Arts have always had a tough run in this country so artists have always had to learn resilience. Still keeping in mind the shattered careers and companies and the Morrison government’s late niggardly assistance, how wonderful to see our local professional companies start to come into their own again. A big bold Shakespeare production of a difficult play managed deftly and imaginatively by director Robert Jarman. The Winter’s Tale, one of Shakespeare’s late ‘romances’ presents peculiar challenges with its mixtures of drama and farce, Christian and pagan, but none more so than for the lead actor, Leontes, King of Sicilia, who must perform a complete volte-face  early in to kick-start the whole show. Robert cast home-grown national actor and vocal coach Robert Maxwell in this notorious role and I caught up with him recently to chat about this and a few other things.

Leigh: Thanks for agreeing to talk to me Robert. I always find the most intriguing part of any artist’s biography the beginning. Tell me, how did you get into acting?

Robert: I grew up in a farm in the Fingal Valley (north-east Tassie), and I really didn’t think acting was a realistic career. I acted in college plays while studying at Melbourne Uni, but didn’t really take acting seriously until I moved to Japan when I was twenty-one. I did a short film there and then enrolled in some short-courses when I returned to Melbourne. I auditioned for V.C.A. and just missed out on a place, so I decided to move to New York City to attend the Atlantic Acting School. The Atlantic is founded by the playwright David Mamet and the actor William H Macy. I ended up staying in New York for five years, taking heaps of classes, working in hospitality and getting various acting gigs.

Leigh: Did you ever get to meet Mamet?

Robert: He gave one masterclass. The Atlantic teaches a system called ‘Practical Aesthetics’. Primarily, Mamet feels an actor must respect the playwright’s intention. Text and language become an embodied experience, the text moves through the body.  I enjoyed the technique and layer elements of it in to my teaching.

Leigh: Decades back when I briefly acted and considered these matters, I concluded that every actor must somehow work out their own system. Your body is your instrument, your vehicle, and your voice, it’s so intimate, so particular.

Robert: Absolutely. When I teach my students I say I encourage them to work out their own processes. Each actor needs to create their own unique technique.

Leigh: Plus it depends on the material. You approach Noel Coward differently to Sam Sheppard.

Robert: Sure, and when it comes to Shakespeare you really have to trust the verse, and trust the language.

Leigh: Why did you come home?

Robert: I didn’t have a green card and I started to miss Australia. I returned to the farm one summer holiday and I realised I wanted to stay here, so I found an agent, moved to Melbourne, and started getting some TV work. Then a couple of years later I moved back to Hobart. I did Shakespeare in the Garden’s ‘Comedy of Errors’. Maeve Macgregor had started Loud Mouth Theatre and I did a lot of work with them. Maeve was instrumental in helping me figure out the next step in my career, which was to do a Masters in Voice at NIDA. I knew I wanted to do more training, and this was the perfect fit. So I went off to Sydney for the Masters and stayed for five years, teaching at NIDA and other institutions around Sydney.

Leigh: Let’s move forward to Winter’s Tale. It always seems to me the initial problem with any Shakespeare production is the language. We know the language is glorious but it is also archaic and dense for a modern audience. You talked of trusting the verse and language.

Robert: The audience won’t grasp everything. The actor’s job is to embody the language so through the trajectory of the story, and the psychology of the actor, the meaning is conveyed. Let’s take the famous line: ‘Inch–thick, knee–deep, o’er head and ears a fork’d one!’. If the actor allows themselves to experience the power and violence of the language, then the audience will grasp the intention behind the thought.

Leigh: When the play opens it seems to have already ended. All is in harmony, all retaliations between characters are long established, accepted and amicable. There is nowhere for the play to go. But out of nowhere comes this mad destructive jealousy. It’s yours and yours alone. Somehow, you must convince all the rest of us of this complete turnaround. How did you approach this difficult transition?

Robert: It was really tricky! Shakespeare gives the actor playing Leontes very little time to transition into, as you put it, ‘this mad destructive jealousy’. There is some evidence in the script that Hermione was resistant to Leontes when he was first courting her. He recalls to her that it took her three months to accept his proposal. Why did she take so long? Here are possible seeds of doubt, of creating a possible space for jealousy, but apart from that there’s little in the writing to justify this complete shift. I work a lot with an acting technique called ‘The Lucid Body’ which is all about rearranging energy in the body and discovering the persona, shadow and child-need of your character. Because there’s so little evidence in the text, I used this technique to discover why Leontes operates the way he does. Perhaps he wasn’t given sufficient support or love as a child. Maybe his playmate Polixenes was more attractive, more confident, so when Leontes sees the two of them together as adults it triggers his insecurities and fears.

Leigh: Perhaps he’s unconscious of the way he feels.

Robert: I worked over the grading with Robert (Jarman), building the intensity. After a while Leontes starts to latch onto everything. With motivation, I always try and take my cue from the language, particularly with Shakespeare. I also thought that maybe there had been some slight, some incident, between Leontes and Polixenes that had lain dormant in Leontes’ mind.

Leigh: It’s interesting to listen to your process. As a writer, one is always persuaded to build complex character ‘backstory’, the bulk of the iceberg below the visible tip. I remember Peter Matheson (Blue Cow Theatre’s dramaturg) drilling me to know a character’s favourite colour, favourite food and so on, so that everything I compelled that character to do made complete psychological sense. What struck me in The Winter’s Tale, Robert, watching you physically and mentally break down in right front of me was that it was the absence of back story that was creating the drama. What was this guy doing? Why was he doing it? We didn’t know. Maybe he didn’t know. And suddenly we were all in freefall, the other actors agog as the audience. Anything could happen. And it seemed to me then that this not-knowing released a tremendous burst of dramatic energy. And I fancied I saw Shakespeare’s method here, how this early anarchic explosion would power his play past all contradictions and inconsistencies he wished to introduce to us right through to the final ‘miraculous’ ending.

Robert: I think the absence of back story you’re referring to is the absence of back story for the audience and potentially for the character. The not-knowing absolutely creates dramatic energy, but I think the actor must know where this is coming from, even if the character and the audience do not. I’m not one of those actors who needs to know what my character eats for breakfast, but with a character as complex as Leontes I must be able to justify as the actor, what propels him forward and causes him to create such destruction, even if this is subconscious for him. All this being said, if you trust Shakespeare’s language – the sounds, the rhythm and imagery etc – it will buoy you up and give you countless clues about your character’s trajectory.

Leigh: I would like to have asked Robert (Jarman) why he chose to perform the play at TMAG rather than a conventionally equipped theatre. Of course there have been two other RJ Shakespeares  at TMAG: The Tempest and Hamlet―you were Caliban and Ferdinand in The Tempest―but each in different spaces. So this time around, in that big central hall, was it difficult to project your voice?

Robert: The acoustics were definitely challenging. I felt I was working a lot harder than usual to begin with, but I think we settled into the space after the first few runs. With such an acoustically demanding space there were some performances where I was focused more on clarity than meaning, which isn’t ideal. But I think we got there.

Leigh: I had no trouble hearing it. Robert generally had you facing the audience, and often stationary, like figures on a chessboard, which brought to mind the politics of a court setting and also gave the whole thing in the outer sections a ceremonial feeling. In the pastoral section of course there was a slapstick free-for-all but even then Robert was careful to keep his characters downstage.

Robert: And the props were like pieces from a museum. The setting bled into the story. We were actors inside a museum.

Leigh: It was quite unique. Okay, leaving Shakespeare, what’s next for you?

Robert: I’m off to New York for a couple of months to undertake teacher training in The Lucid Body. There are no teachers currently working in Australia so I’m excited to bring the work here for our actors.

Leigh: I was also going to ask you for a wishlist of roles. What are some you’d love to tackle?

Robert: Hamlet is the one role I’d most like to do.

Leigh: So much for leaving Shakespeare. I guess he represents an ultimate for all actors. What else?

Robert: I’m a great admirer of the Irish actor, Andrew Scott, who was Moriarty in the Sherlock Holmes series. There’s a wonderful monologue written for him by Simon Stevens: Sea Wall. Also in terms of contemporary plays, there’s a two hander, Lungs, by (British playwright) Duncan Macmillan about a young couple trying to work themselves out before starting a family. There’s Jerusalem by Jez Butterworth. Mark Rylance’s performance really inspired me.

Leigh: Yes, it’s a famous performance and play, and recently revived. You’d have to pull something different out of the hat, but I’d love to see you do it. That’s another play in which richness and complexity of language is paramount.  As a writer, I have to say it’s great to hear you extolling the importance of language. I still believe language is central to Drama, whereas with Film that’s not necessarily the case. Well, good luck in New York and I hope it’s not too long before we see you back here again.

Robert Maxwell is a graduate of the Atlantic Acting School and holds a Master in Fine Arts in Voice from NIDA. Locally he has performed roles for The Tasmanian Theatre Company, Loud Mouth Theatre and Blue Cow Theatre. Screen credits include Neighbours, The Doctor Blake Mysteries, One Life to Live, Rosehaven and Cut Snake.

Leigh Swinbourne has published two short story collections and a novel. He has six plays digitally published with Australian Plays Transform. His work has been shortlisted for The Patrick White Playwrights’ Award and the Tasmanian Literary Prizes.