Cassandra began her writing journey with a residency at the TWC in 2015. Two years later she had trained her way up to coordinating the Twitch program for young writers, where she had her own start. With a background in blogging and theatre, Cassandra is passionate about providing others with the same life changing opportunities that the TWC gave her. Though she originally hails from New South Wales, Cassandra is in love with her home in Tassie and is dedicated to the strong literary community that lives here. 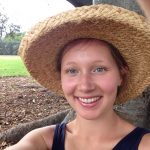 Arianne is a writer of fiction and avid reader. Her stories have been published in The Hunter Writers Centre’s Grieve anthology, Swinburne University’s journals Backstory and Other Terrain, and Corvid Queen magazine, and her interviews in Platform magazine. In February 2015 and 2016 Arianne spent a week at Varuna House in the Blue Mountains, NSW. She returned to Varuna again in 2017 after being awarded a place in a short story focus week facilitated by Tegan Bennett-Daylight. Arianne graduated in 2017 with a Bachelor of Behavioural Science, and in 2019 with First-Class Honours in Creative Writing from the University of Tasmania. She is currently editing a novel as part of a mentorship with author Angela Slatter, with the assistance of a grant from RANT Arts.